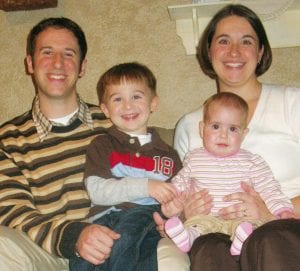 Nine-month-old Eliza Bacik stares intently at the stranger in her Archbold home with a wide-eyed look that only a baby can manage.

When her mother, Kara, speaks to her in her happy voice, the chubby-cheeked little girl wrinkles her face into a smile and giggles.

Eliza doesn’t know it, but she’s lucky to be sitting on her mother’s knee in the family living room. She was born with a rare condition in which her body cannot process fats, which resulted in fluid around her lungs.

For a long time, Kara and her husband Jason were afraid they weren’t going to get to bring their daughter home.

Through this difficult time, the young couple was not alone; the community rallied around them.

Kara said between 32 and 35 weeks into her pregnancy, "I started not feeling great."

Physicians measured her; the results said the baby was bigger than usual.

That was followed by an ultrasound test, which discovered fluid around the baby’s lungs.

There was a trip to the Toledo Children’s Hospital, and another ultrasound.

The test confirmed the earlier diagnosis. Eliza was given a 10% chance to live.

"They weren’t expecting to keep her alive, but she had a great team working for her," she said.

The couple called their families; their families got in touch with members of the Baciks’ church, St. John Lutheran, south of Archbold.

At that point, the prayers started.

In the meantime, Eliza continued to struggle. She spent three months in the Neonatal Intensive Care Unit. Tubes were placed into her chest cavity to draw off excess fluid. She was placed on a ventilator to help her breathe.

Jason and Kara didn’t get to hold their daughter until 18 days after she was born.

"Every day was scary," Kara said.

During this time, Eliza’s brother, three-year-old Brady, was being passed around between grandparents, aunts and uncles.

Kara was spending days at the hospital with Eliza. Jason returned to work- both he and Kara are teachers at Archbold Elementary School.

"There was a computer (at the neonatal unit), so I would send him an email, or I would call," Kara said.

"I would go up in the evenings or take time off school," Jason said.

Kara commuted back and forth so she could spend some time with Brady.

Prayers were the number one form of support the family received.

"…There were offers to clean our house, get groceries, and more. People were generous with their time and their money," Jason said.

"Through the school, there was a bake sale," he said.

Jason said his second grade students knew his daughter was in the hospital, but didn’t know how severe the situation was.

"The kids and their families supported us," he said.

All that support was appreciated, because the first three months of Eliza’s life "were a complete roller coaster ride," Jason said.

"There would be a week or a few days that would be good, then she would backslide," Kara said.

Jason said when Eliza was finally removed from the vent, "we knew she was doing well."

Kara said the support of the community "felt great.