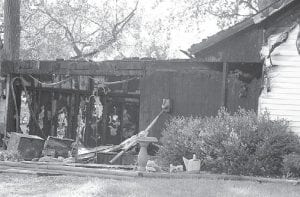 The garage at this home in rural Fayette was severely damaged by fire in the early morning hours, Wednesday, Aug. 15. Jeffrey Pember, the homeowner, was alerted by his dogs and escaped the blaze. The Archbold Fire Department, along with four others, assisted Fayette in battling the blaze.– photo by David Pugh

Bob Stillion, Fayette FD chief, said the fire was reported at 12:50 am.

He said the owner, Jeffrey Pember, was awakened by his two dogs. The first floor of the home was filled with smoke. Pember and the dogs escaped through a patio door.

Stillion said Pember reported hearing “a crackling noise” from the attic as he left the house.

“The only thing in that area was electrical. We’re leaning toward electrical as the cause,” Stillion said.

When firefighters arrived, they discovered an attached garage and utility room was fully involved.

He called for assistance.

In addition to a full response from Archbold, Fayette received help from a tanker from Brady Township, Williams County; a tanker from Alvordton; an engine and crew from Wauseon; and a tanker and a rapid intervention team from Morenci, Mich.

A Rapid Intervention Team, or RIT, is a team of firefighters ready to go into a building if another fire crew is trapped inside.

Stillion said firefighters were getting ready to enter the house when the first floor “flashed over,” which occurs when the temperature in a room climbs to a point that the contents burst into flames.

Firefighters fell back and used hoses to knock down the flames before entering a second time.

The original portion of the home was built in the 1890s, and there were several additions.

That, Stillion said, created a problem, because firefighters had trouble finding the fire in voids, nooks and crannies.

Firefighters left the scene about 5 am.

One firefighter was treated at the scene for exhaustion; there were no other injuries.– David Pugh