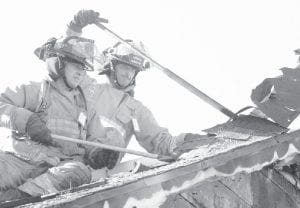 Kris Lauber, left, and Duane Beck, Archbold firefighters, remove roofing material from a home in the 1700 block of Co. Rd. 16 that caught fire Saturday, Sept. 15. AFD was one of four fire departments that responded.– photo by David Pugh

A young man’s attempt to burn a bee’s nest from a tree resulted in a house fire answered by four area fire departments, Saturday afternoon, Sept. 15.

Marv Wheeler, Wauseon Fire Chief, said the nest was in a tall evergreen tree near the front door of a home at 1785 Co. Rd. 16 owned by Efigenia Donnett.

The fire spread to the tree, then melted the vinyl siding off the southeast corner of the house and got into the soffett overhanging the exterior walls.

From there it got into the attic and inside the walls in a room on the southeast upstairs corner of the house. Firefighters had to cut a hole in the roof to ventilate smoke, then open the walls in the upstairs bedroom to get to the fire.

Firefighters from Wauseon, Archbold, and Ridgeville Corners, along with a Rapid Intervention Team from Morenci, Mich., were at the fire scene.

An RIT team stands by at a fire scene. If firefighters are trapped inside a building, the RIT team is ready to go in and rescue them.

A damage estimate has not been completed.–David Pugh