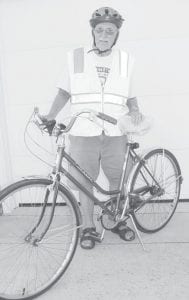 Ralph Aschliman, 86, Archbold, with his 40-year-old bicycle. He rode the bike more than 5,000 miles this summer, and more than 10,000 miles in two years. Aschliman said riding in windy conditions is his least favorite, so he often rides in the early morning and late evening, when winds die down.– photo by David Pugh

The driving distance between New York City and Los Angeles is pretty close to 2,800 miles.

Ralph Aschliman, Archbold, has ridden his bicycle far enough to make the trip once this summer, and get most of the way back.

He’s done it on a 40-yearold, three-speed bicycle. He rarely leaves Archbold, and rarely goes south of the Norfolk Southern tracks.

It starts at his home in the Fairlawn retirement campus, winds through the North Pointe subdivision, down into Walnut and West Holland streets, and then crosses North Defiance Street.

The route meanders out to Meadow Lane, Clover Lane, and Lincoln Street before making its way back out to the Fairlawn campus.

He travels through one traffic signal and 29 stop signs.

A computer mapping service said the route is 7.5 miles, “and if I don’t wobble too much, it’s right on the money.”

A small digital speedometer on the bike keeps him honest.

“I like to ride (the route) at least two times before breakfast, and during the day whenever I feel like it.” That’s every day, weather or schedule conflicts permitting.

It takes him about 35 minutes to complete one circuit.

“On average, if I ride 61 miles (about eight circuits), that’s five hours,” he said.

“I try to average about 12 miles an hour. That’s not considered fast; that’s the low end of serious bicycle riding. Guys with high-tech bikes ride 20, 25 miles per hour.”

During a bicycle race in Denver, speeds were around 30 mph, he said.

Why does he ride?

But his riding hasn’t been entirely incident-free.

He’s had two spills. Recently, he was riding to his daughter and son-in-law’s place 4 1/2 miles outside of town.

As he turned into their stone driveway, “I was going a little too fast. I went to turn in, and you don’t turn on stones! It just scooted out from under me.”

He hurt his hip, and was “a little bloody.”

And he cracked his helmet– which he always wears.

He also admits that he treats stop signs as “cau- tion,” adding he’s never seen a bicycle rider actually stop for a sign.

Once, he said, he was, “a little careless,” and pulled out in front of a motorist.

Most drivers are courteous, but he said once, an older woman went “flying past me like I wasn’t even there!”

Aschliman’s bike is a 1973 Schwinn Breeze three-speed, in campus green.

“It’s a lady’s bike. I find it handy for me, because I’m stiffer than I’ve been,” he said.

He believes it was originally sold by a bike shop in the Detroit suburb of Harper Woods. The list price was $74.95.

“It’s not fancy at all. It’s not a high-tech bike. It’s a heavyweight. It weighs a good 40 pounds,” far more than specialized bikes.

One thing he’s learned from his research is the bike has to be adjusted properly for the rider.

“It depends on the adjustments. You’ve got to have it just so,” he said.

“I looked on the Internet, on the different blogs, and that’s one thing they stress– you have to find the ‘sweet spot.’”

There’s nothing particular that he looks for or watches on his route.

“In the early morning in the spring, you’re out there, and you hear the chorus of the birds. On the next ride, I see the rabbits and the squirrels.

“On the third ride, it would be all the dogs taking their owners for a walk,” he said.

In a car, he said, you wouldn’t probably notice those things.

“There’s no big purpose” to his riding, he said.