Aschliman Recognizes Community In His Citizen Of The Year Speech 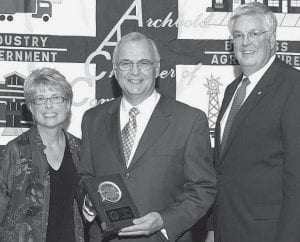 Debbie David, left, outgoing Archbold Area Chamber of Commerce president, and Paul Siebenmorgen, incoming president, right, present Lynn Aschliman, Archbold 2007 Citizen of the Year, a plaque commemorating the award. Aschliman heaped praise on the Archbold community, stating that without an outstanding community, there would be no citizen of the year. – photo courtesy Royal Images

Lynn Aschliman, Archbold Citizen of the Year, recognized the community in his acceptance speech during the Archbold Area Chamber of Commerce annual awards banquet, Thursday, Nov. 1.

He told the audience countless numbers of persons had contributed to his achievements. He mentioned family, church, and friends, noting that he and his wife, Joan, as infants, were in church within a few weeks after being carried home from the hospital.

“We were in church every time the doors were open. And when we were older, we were pushed, there,” he said.

But he said church had taught him to first love God, and then love others.

He also recognized the Archbold Area School district and the benefits Archbold schools offer, from academics and athletics to music education and school musicals.

“This is a town that loves its kids. It supports and follows them everywhere,” he said.

He told the story that while he and four other AHS alumni were playing football for the University of Toledo, almost the entire village came to Archbold Night at the UT Glass Bowl stadium. 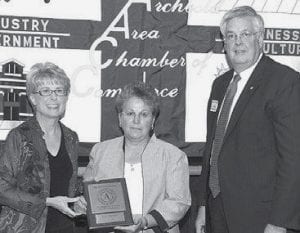 David and Siebenmorgen with Cindy Winzeler of TJ Automation. The firm was recognized for 10 years of service in the Archbold area.- photo courtesy Royal Images

Returning to Archbold after college, Aschliman said Maynard Sauder, of Sauder Woodworking, took a chance, entrusting “a 22 year-old kid as his purchasing manager with half his gross income.”

He noted he had worked with three generations of Sauder family leadership at Sauder Woodworking, and appreciated the opportunities that relationship granted him.

He talked about Erie Sauder, the company founder, and the company’s annual Christmas parties, quoting Erie as saying, “As we come to this season of the year, let’s not forget the Babe of Bethlehem.”

In a speech of commendation, Kevin Sauder, company president and chief executive officer, told how, in 1981, he was a college student, and his father, Maynard, asked Aschliman to put Kevin to work in the purchasing and materials handling departments. 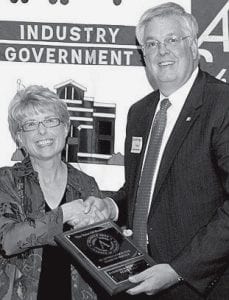 He said Aschliman was advocating business ideas and practices that he was studying in college.

Kevin said his father saw in Aschliman someone who “was not afraid to shake things up, take risks, and move people out of their comfort zone.”

“Lynn taught me things like how to deal with suppliers, customers, and employees in a fair and honest way,” Kevin said.

“And he taught me how to shake things up a little. Change can be fun, and it’s good for business,” he said.

He said Aschliman was a great mentor, strong leader, and warm and caring individual.

Will Kress, chief executive officer of Green Bay Packaging, said when his company looks at making an acquisition they meet the company’s people first, then look at equipment and finances.

After meeting Lynn and others at Archbold Container and Sauder Woodworking, they learned “they were a great bunch of guys.” 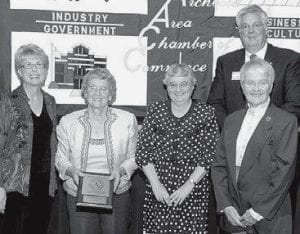 David, left, and Siebenmorgen, with three women from Hands of Grace. They are (not in order) Louise Belden, Nancy Beadle and Loretta Derringer.- photo courtesy Royal Images

He said some people asked him if he intended to roast Aschliman at the awards program.

Kress said he had only known Aschliman 2 1/2 years, and, “he had not caught him at anything yet.”

But he said he doubted that after many years, he probably would say the same thing.

Kress said Archbold “is a great place, and we’re proud to be part of your community.”

Two of Aschliman’s three children, son Tad and daughter Nicole Schrock, told the audience about their father, emphasizing his humility.

Tad talked about the time he found a UT Most Valuable Player game ball in the attic, and his father convinced him they handed out game balls like that to almost every player.

Nicole said she didn’t even know her father played college ball until someone asked her about it.

Nicole also described how, after failing to get a much-wanted job, her father said it was time to celebrate the first day of the rest of her life, and took her and her new husband to dinner to celebrate the event.

Aschliman closed his speech, saying the Citizen of the Year banquet is truly a celebration of community; of what the individual can give to the community, rather than take from it.