Armstrong: A Zeal For Flower Gardening 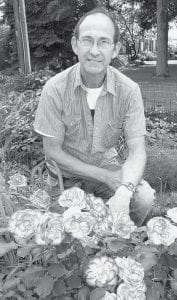 Larry Armstrong appears with flowers in one of his gardens at his home in Archbold. He has won a wide variety of awards over 30 years in competition. He said new gardeners should learn to be “patient with yourself and persistent with gardening.” – photo by Rita Bilen

Go past the Archbold home of Larry Armstrong, and you notice all of the flower gardens that surround his property.

It’s obvious that flowers are a large part of someone’s life.

Armstrong’s fascination with gardening began years ago, while digging in the sandbox as a child. Once in elementary school, he remembers planting seeds of corn and watching them grow.

“That’s where it all began; learning that what you put into the ground brings forth that kind of result,” he said.

He learned to like growing things from his parents. His father was a farmer who “showed me the ropes by just demonstrating in a hands-on way.”

Armstrong started gardening on his own when he was first married 37 years ago. Early on, his primary focus was a vegetable garden. Now it’s flowers.

“I enjoy the color that it brought to the yard,” he said.

He also enjoys the interaction with other people, often giving flowers to those who pass by. He purposefully put some roses along the sidewalk, and “that was a springboard” to meeting new people. 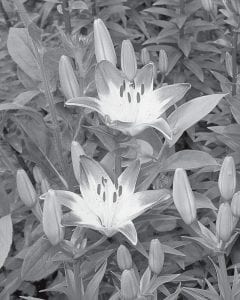 Some of Armstrong’s flowers in bloom; others will bloom soon. Armstrong said he doesn’t grow flowers for the sake of competition alone. “You do it because you love the beauty of the flowers, the colors, the people you meet.”- photo by Rita Billen

He has so many different varieties of flowers that he is stumped when asked how many. Among others, he has roses, dahlias, tulips, daffodils, columbines, lilies, and peonies.

Taking care of his many gardens can be time-consuming. He keeps up his gardens “in my spare time. Sometimes it’s 15 minutes, sometimes it’s all day.”

Right now, Armstrong is working mostly with dahlias. This is the time of year they have to be planted to get them ready for the Fulton County Fair. He is also interested in green tulips, which come in many colors, but also have green on the petals.

For the past 30 years Armstrong has entered some of his flowers in various competitions.

“Sauder Village had a rose show a long time ago. I actually entered some things because people said, ‘You ought to.’ That encouraged me to try,” he said.

Now he is the president of the group that works together to put on the Fulton County Fair flower show. He has generally focused on entering flowers at the fair.

“I don’t keep track anymore. There were so many ribbons, I just gave them back because I really didn’t need them,” he said.

He keeps a few Best of Show ribbons to remind him of what he has won.

Before you begin your own garden, Armstrong suggests that you talk to other gardeners and get starts from them.

“Think about how much time you want to put into it. Don’t get any more involved with it than what you are relaxed and comfortable with. Don’t expect to have a show garden right off the bat. Grow into it,” he said.

“As much as anything, you have to be patient with yourself and persistent (with gardening).”

Competitions have not been his primary focus.

“You do it because you love the beauty of the flowers, the colors, the people you meet. You get personal satisfaction when you look at something and it’s just perfect,” he said.

For Armstrong, other benefits of gardening include stress-relief, being outside in the sun, and general relaxation.

“For me it’s just a good feeling when I’m outside. It keeps me limber.

“As the years go by, you go a little slower, but it keeps you younger if you are active.”

Although Armstrong is intrigued by the colors and designs of flowers, his real reward is “the feedback I get from people when I see the excitement in their eyes.

“It’s not about flowers. It’s about the people you meet.”