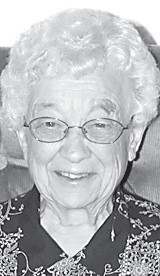 Arlene Mary Grieser, age 94 years, of Archbold, passed away Jan. 24, 2018, at Fulton County Health Center, Wauseon where she was a patient for just a few days.

She was born April 16, 1923, in Wauseon, and was the eighth child of Daniel Jacob and Rosie Dinah (Beck) Grieser.

Arlene accepted Christ as her personal Savior and was a member of West Clinton Mennonite Church.

She attended two six-week periods at Winter Bible School in Goshen, Ind. Needing to wait until she was 21 to attend nursing school (a dream of hers before high school), she attended La Junta Mennonite Nursing School, La Junta, Colo., graduating from there in June 1947.

Arlene worked there for one year before returning home to care for her dad. She also earned a B.A. in “Natural Science for Nurses” in 1952 at Goshen (Ind.) College.

Arlene spent three years in Voluntary Service– one year in New Mexico and Arizona working with migrant Navajos and two years working at a hospital in Aibonito, Puerto Rico. She also worked at Wauseon Hospital and Elkhart (Ind.) General.

In 1965, Arlene moved to La Junta, Colo., living with her sister, Florence, and working as night supervisor of nurses at Arkansas Valley Regional Medical Center (AVRMC– then the La Junta Mennonite Hospital) until her retirement in 1988.

She held the volunteer position of assistant manager at Ten Thousand Villages, La Junta, Colo., for many years, and was a member of the AVRMC Auxiliary.

She also was actively involved in the Emmanuel Mennonite Church, La Junta.

Arlene took many trips, often with her sister Florence. She traveled to Mexico, Europe, Canada, Japan, South Korea and all of the states in the United States.

In 2001, she said she still liked Colorado best, and never thought she would be moving back to Ohio.

Although Arlene was never married or had children of her own, she quickly became a surrogate mother to her nephew Curtis Grieser and wife Connie after their marriage in 1973; and then later became a grandmother to their children, Scott and Heather Grieser.

She was affectionately known as Gramma Aunt Arlene by the children, and she was a great influence in their lives!

Later, when the children were married, she became Great-Gramma Aunt Arlene to Scott and Keri’s boys Jacob and William Grieser, and to Heather and Peter’s daughter, who is Arlene’s namesake, Gloria Arlene Ranslow!

Arlene just loved the fact that she had a namesake and would always ask “how is Gloria Arlene doing!”

She was preceded in death by her parents; brothers Orland, Cletus (Luella), Ivan (Kathryn), Chauncy (Ilva), Dale and Marvin; as well as sisters, Dorothy, Florence, and Doris (Wesley Liechty).

Arlene’s body was gifted to the University of Toledo Medical Center.

A memorial service will be held at Fairlawn Chapel on Saturday, April 14.

Short Funeral Home was in charge of the arrangements.