For some, the Fulton County Fair means Ferris wheels and blue ribbons. Or big-name country music stars and a midway so crowded, you can’t move.

For Mark and Amy Miller, Archbold, the fair was the start of it all, really.

Mornings were devoted to race preparation, and afternoons to competing and spectating. “I don’t think I ever missed a race,” he said.

For Carl Buehrer, today’s Fulton County Fair board president, the fair meant adventure. He and other youth who slept in the dairy barn lofts decided they “were gonna get” the man whose bucket of water “about drowned” them for morning wake-up call.

So they secured a bucket to tip water on the man when he opened the door.

It didn’t go as planned.

“The next morning, we got soaked again,” said Carl. The man had suspected something and crawled through the window instead. 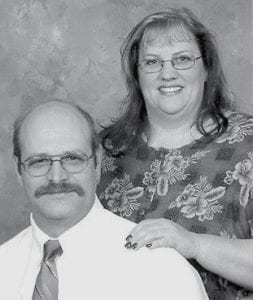 “We never did get ahead of him.”

How does one describe fair atmosphere?

“Which day and what location?” asks John Poulson, who just started his 18th year as Pettisville vocational agriculture instructor and FFA advisor.

As members of the fair board, “we try to have something for everybody,” said Buehrer. He’s been board president since 1974.

“The community is what makes the fair successful, and we try to listen to them.”

“Most people enjoy the fair,” said Poulson. “Probably not everyone, but pretty much.”

“I go,” said Mark Miller, “because I enjoy it and you never know who you are gonna run in to and what you’re gonna see.”

Sometimes even strangers ask to rest from walking the fairgrounds at the Millers’ campsite.

Maybe that’s what so fascinates people about the fair: anything can happen.

One of the things that draws people to the fair is the midway, where games of chance, thrill rides, colorful lights, and music have attracted crowds for decades.

Nofziger is over 90 years old, but he still remembers exactly when he began attending the fair and enjoying the midway. He was 16, and the year was 1931.

“After the races and everything was all over, why, sometimes you had a girlfriend and you’d go along and see if you could knock over the bottles” in a midway game.

Cupie doll prizes were sure to impress his female companions.

“It used to be just a concession stand and one or two rows,” said Nofziger of the fair. “Nothing real exciting.”

“I’m not much on the fair outside of the livestock part,” said Poulson, who enjoys livestock judging contests, helping with Junior Fair shows, and circulating through barns and displays. 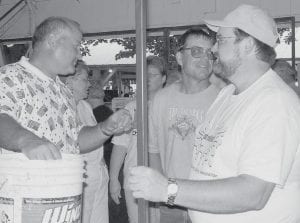 “The rest are midway people, grandstand people, or something else.”

On Junior Fair Day, when local schools are closed, area youth fall in Poulson’s “midway people” classification. With wristbands, they have unlimited access to rides and games.

Other people look forward to just being on the grounds.

“I go to hang out and to see people I haven’t seen in a long time,” said Mike Miller, Mark and Amy’s son, who attends the fair daily.

Nofziger appreciates everything. He displays antiques, will never forget the Willie Nelson concert, and is a regular at the Friday evening pie auction.

So if anyone knows what defines a true fairgoer, it’s Nofziger. And his definition- of course- centers around the food.

“You gotta have a pork chop and a beef sandwich and a malted milk,” he said. “If you haven’t had that, then you haven’t been to the fair.”

Fair food is the one thing everyone in Poulson’s categories agrees on.

Amy Miller has a network of favorite food stands. Before the week is up, she said, “We have to hit all those.”

Milkshake and sausage sandwich sales each topped 40,000 last year. Poulson even said he knows a boy who drank 11 milkshakes in two days.

For 150 years, the fair has been a tradition- and a force creating tradition in many families.

A term on the Defiance County Junior Fair board is “probably where I got started loving the fair the most,” said Poulson.

Like him, his children, Jessi and Shane, attended the fair with 4-H and FFA projects and chose to enter agricultural fields.

Buehrer’s children and grandchildren work the fair each year. His son takes fair week off from work to volunteer.

“It’s been a part of their lives,” he said. “It’s something they look forward to.”

“I guess that’s probably where I get it from,” said Amy.

She and Mark have helped with Archbold’s Countryside Clovers 4-H club for 14 years.

Their children, Amanda and Mike, completed 4-H, but Mark and Amy aren’t finished with it yet. Mark said 4-H-related work, like aiding with shows, brings him to the fair each year.

“It teaches you responsibility,” he said, “because if you take an animal you have to take care of it, and it also teaches you to finish what you start.”

Now he’s an advisor who works with youngsters too young to join the fullfledged 4-H program.

If Junior Fair involves many in the fair, so does camping. There are waiting lists, even with 550 campsites on the fairgrounds. Good thing there are a few more sites than the 58 first offered in 1974.

“Camping is so important to people,” said Buehrer, “we’ve had a couple of cases where people have divorced and the camping space at the fair was in the divorce agreement.”

Amy Miller inherited her family’s site, and she’s camped there since age 10.

“You know that you’re just going to be there,” she said. “It’s like a little mini vacation for everybody.”

Especially for children, Amy Miller said, the fair is important as a showcase of their hard work on 4-H and FFA projects. “Kids are very proud of their animals and their accomplishments,” she said.

Buehrer enjoys seeing families and friends enjoying time together at what he says is one of the few “fully family-oriented” activities in a world that’s “going so fast.”

“I think the values that we’re losing are still at the fair,” he said.

The Fulton County Fair celebrates 150 years of excellence, Friday, Aug. 31 through Thursday, Sept. 6, at the fairgrounds north of Wauseon.

Laser and fireworks shows, local talent like Shelby Eicher and The Messengers, a beard and mustache contest, and vintage baseball might make this year the best yet.

Who knows? Anything can happen.