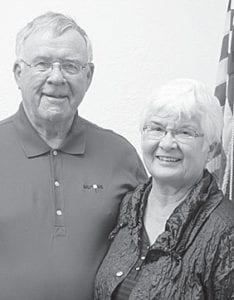 Completing one of the things he wanted to do before shuffling off this mortal coil, Jim Archbold and his wife, Nancy, visited Archbold Tuesday and Wednesday, May 8-9.

“Visiting Archbold, Ohio, was on my bucket list of things to do,” he said.

Jim, who lives in Minnesota, said his father came from Bluffton.

“Mom & Dad talked about Archbold, Ohio, but it was a mystery to us,” he said.

His family arrived from Ireland by way of Pennsylvania.

“There’s a map of Ireland with all the surnames on it. I’m sure it’s another tourist type of thing, but south of Dublin, in Wicklow County, there’s Archbolds.

Jim said there had been an Archbold family reunion picnic in Bluffton on Labor Day for many years. Family members would be first in line at the Bluffton village hall on the first business day of each year to reserve the town park for the event.

Today, there is less interest in the reunion.

The Archbolds traveled from Minnesota to visit some cousins– some in their 70s, one in his 80s.

During their trip, they decided on the spur of the moment to visit Archbold, Ohio.

While in Archbold they were able to take in the Sauder Village Quilt Show.

A trip downtown led them to a local restaurant, and they purchased some Tshirts.

They also stopped at the office of this newspaper to inquire about how Archbold got its name.

They were referred to the 1991 Quasquicentennial edition about the 125th anniversary of the village, which contains two articles about the naming of the village. The articles give two theories.

One theory is Archbold is a variation on the French word, “au-cheval,” meaning “on horseback.” The area was so muddy, the only way a man could reach the village was on a horse.

The second is the town is named for two civil engineers who helped survey the railroad, a Mr. “Arch,” and a Mr. “Bold.”

There were various spellings of Archbold, including “Archibald” and “Archibold.”

One version, “Archbald,” was reportedly in honor of Pennsylvania capitalist James Archbald, but when Archbold was incorporated in 1866, it was under the name spelled with an “o.”

Jim and Nancy said they enjoyed their visit to the community, finding everyone friendly and accommodating.

“Everybody went out of their way,” Jim said.