Archbold’s Major Fires Over The Years

Ruins of the August 30, 1913, fire that destroyed the east side of downtown Archbold.

(Editor’s Note: This article is a compilation of several Archbold Buckeye articles, published over several years.)

Archbold has been no stranger to fire in its 150- year history.

Fire has struck Archbold and the area on many occasions over the years, but the number of lost lives has been relatively low.

In terms of loss of life, perhaps the worst occurred in the spring of 1978, when fire started around the chimney of the Robert Hausch home on Stryker Street. The family was caring for children in the residence when the fire broke out.

They came out, put on the masks but not their protective turnout gear, and attempted to enter a second time, but were stopped. 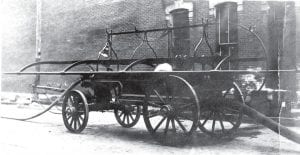 This is “Old Phoenix,” the hand-operated fire pump which was purchased for $150 as a used piece of equipment from the city of Toledo in the 1870s, when Toledo adopted new horse-drawn steamer pumpers. It failed when valves stuck on Saturday, Sept. 30, 1913, when parked on the north side of West Holland Street, near the rear of what used to be the City Drug Store building and is now Carol Ann’s City Cafe.

During the Depression era of the 1930s, one firefighter was reportedly killed when he was struck on the head by a falling brick.

One man died in a November 1945 fire that destroyed Sauder Woodworking.

Maynard Sauder, former company president, remembered the fire in a 1984 interview with this newspaper.

That fire did $150,000 in damage and was attributed to an electrical extension cord that threw a spark and caught a ladder on fire.

Fire quickly spread to freshly-varnished tables hanging on an overhead conveyor. Sauder said he was told the fire leaped from table to table, and soon, the whole factory building caught fire.

One firefighter was hospitalized after a Feb. 20, 2004, fire at Sauder Woodworking.

Crews had been called to battle a fire in the sawdust collection system. Three firefighters were on a lift, taking a section of large tubing apart, when a dust explosion occurred. 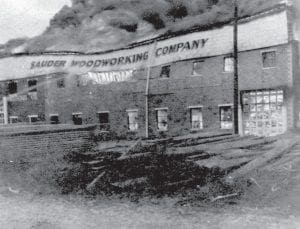 Sauder Woodworking Company yielded to the heat of rolling flames in November 1945.

A helicopter ambulance landed near the building and flew the firefighter to a Toledo hospital. Two others were treated at the Fulton County Health Center.

A firefighter suffered burns and another injured his ankle at the site of a barn fire on Co. Rd. 25-2 northwest of Archbold on Feb. 17, 2008.

The radiant heat of the blaze was so intense one firefighter suffered first- and second-degree burns through his protective turnout gear.

There was ice on the ground at the time of the fire. A layer of water from the fire hoses made the ice extra-slippery.

Reports from this newspaper indicate a man returning from his home in late October or early November saw flames coming from the windows of the building, and ran to the home of company founder Erie Sauder. 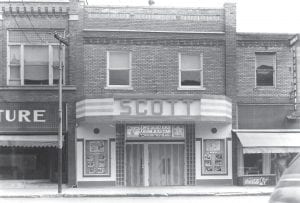 The Sauders attempted to place a call to the telephone central office, but the phone was connected through the plant, and the line was already burned through.

While the factory office and much of the stock was destroyed, machinery was left in good condition.

Both workers and volunteers cleaned the equipment. The following day, it was moved to a garage.

The fire-damaged building was torn down to make way for the new building, which burned in 1945.

However, the plant sprinkler system contained that blaze, Erbskorn said at the time.

The Lugbill Auction barn, for decades a major business in Archbold, was also destroyed in a Dec. 10, 1943 fire.

Much of downtown Archbold on the east side of the 200 block of North Defiance Street was lost to fire on Aug. 30, 1913.

In the block bounded by East Holland Street on the north and Depot Street on the south, 20 buildings were destroyed; only four were saved. 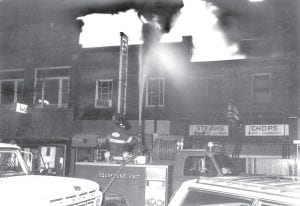 Cold weather hampered the efforts of firefighters battling the Scott Theatre on Feb. 23, 1972. Fire hoses froze, and the alley behind the buildings on the east side of the street had a coating of ice. The loss was around $100,000, and 50 firemen and 11 pieces of equipment battled the flaze.

The fire was said to have started about 10:30 pm in a room at the rear of the Theobald & Gype Dry Goods store, but the exact cause of the fire remains a mystery.

Other communities sent their own fire equipment on railroad flat cars. They began arriving after midnight.

During the battle against the blaze, reports say women went around town, asking for bread to make food for the firefighters.

About 1:30 that afternoon, a mechanic was working on a large truck at the S.C. Nofzinger garage on the east side of the 200 block of North Defiance Street, when the truck caught fire.

The report from this newspaper said firefighting efforts were underway when the fuel tank on the burning truck exploded, spreading burning gasoline throughout the interior of the building.

In a case of irony, both the German Township and Archbold village fire trucks were being stored in the building, as their usual garage space at what was then the Town and Township Hall was being remodeled.

One man tried to save one of the trucks. He reportedly managed to start the engine, but intense heat the flames caused him to abandon the effort; he suffered severe burns to one arm.

Napoleon started with one truck, but it developed engine trouble.

The truck was abandoned, and a second truck, described as “Napoleon’s big Ahrens-Fox truck” came into town at a “terrific speed.”

The fire was contained to the garage and three other buildings, including a grocery store.

Heat from the fire was so intense, plate-glass windows on storefronts across North Defiance Street cracked, causing the glass to fall onto the sidewalks.

Another building on the east side of the 200 block of North Defiance Street caught fire on the night of Feb. 23, 1972.

This time, trouble in the heating system at the Scott Theatre set the building ablaze.

Cold weather hampered the firefighting efforts. Erbskorn remembered fire hoses froze, and the alley behind the buildings on the east side of the street had a coating of ice.

A large fire destroyed the Archbold Elevator building in January 1970. The business was located at the corner of South Defiance and East Mechanic streets.

Getting sufficient water to fight the fire was a problem, as the area was then served by small four-inch waterlines.

Fire pumper trucks from Wauseon and Fayette pumped so much water from the system, the Archbold pumper, which was connected to the four-inch water main along East Mechanic Street, was starved for water.

A large industrial fire at Frozen Specialties, Inc., during the early morning hours of June 16, 1999, resulted in the evacuation of 70 homes north and west of the plant.

The company manufactures frozen foods, mostly pizzas, at the Archbold facility; the larger freezer system utilizes ammonia as a coolant.

A little after 1 am, plant workers began smelling ammonia. They hit an emergency stop button that shut down the plant and evacuated the building.

The order went out to evacuate the homes, and police set to work.

After an initial interior attack on the fire was abandoned due to debris and heavy smoke, Brodbeck said he thought fire crews would need to carry out debris by hand.

Initially, a call went out to surrounding departments asking each for one fire crew in full turnout gear.

In addition to Archbold, 17 other area departments responded. About 160 firefighters assisted in the battle against the fire.

Village residents were given the all-clear to return to their homes about 3:05 am.

Damage was rumored to be in the millions of dollars. It was said as many as three million pizzas were lost.

There can be no discussion of fires in Archbold and Northwest Ohio without the mention of Julius Burch.

Perhaps the worst serial arsonist in the history of the region, Burch was reportedly responsible for 124 breakingand entering cases, including 27 in Archbold, plus 37 arson fires, including at least three in the Archbold area.

The worst was a fire in the Oberhaus Enterprises warehouse on the south side of town.

The building was filled with Spangler Candy Company products, including about 350 million Dum Dum suckers.

The suckers were in cardboard boxes, wrapped in plastic, on wooden pallets.

Firefighters from six departments had to stop the fire from inside the building. Three times, Brodbeck said they had to abandon their line of defense and fall back before they were able to stop the fire.

Damage was set at $6.5 million in candy inventory. Total damage was estimated at $10 million.

Then at 12:10 am the following morning, June 20, as arson investigators from the State Fire Marshal Office were staying just down the road at the Sauder Heritage Inn, a fire was started at the First Church of Christ, 22251 St. Rt. 2.

Firefighters were called at 12:10 am to the church after a Toledo Edison worker spotted the fire.

The building was bulldozed and a new one built on the same property, but in a slightly different location.

A third area fire linked to Burch was at the Lutheran Social Services office, south of Archbold on St. Rt. 66.

Burch was arrested in December 2002 on charges of breaking and entering and possession of criminal tools.

On Feb. 21, 2003, a press conference was held at which Burch’s arrest, and his connections to arson fires, including those in the Archbold area, was announced.

Burch was eventually sentenced to more than 35 years in prison.

As of May, Burch was an inmate at the Pickaway Correctional Institution, near Orient. He is 56 years old and due to be released in April 2039.

If he serves his full sentence, he will be 79 years old when released.

In 2010, the First Church of Christ disbanded, citing too small of a congregation. Today, the former church is the office of Shalom Ministries.