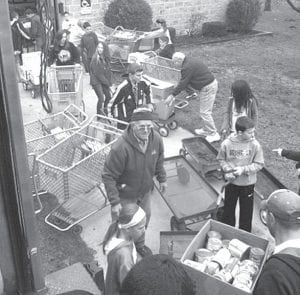 Members of the Archbold Middle School student council and other volunteers help unload a truck of food and clothing Monday morning at the Junior Fair Building at the Fulton County Fairgrounds. Volunteers were preparing for Fulton County Christmas Cheer, an annual event that distributes items to families in need.– courtesy photo

Families in need were scheduled to pick from hundreds of food items, clothing, household supplies, and toys at the store, located in the Junior Fair building at the Fulton County Fairgrounds.

The middle school students, ranging from fifth through eighth grades, picked up the 1,600 non-perishable food items Archbold students collected, loaded them on a large truck, and accompanied them to the fairgrounds.

Gericke said they spent about half an hour unloading the truck, then spent the rest of the day sorting the items.

Gericke said at first, the students see the trip to assist Christmas Cheer as a way to get out of a day of school.

“But once they get here and see everything, they get the idea that there’s more to it.”

It’s then that the students get involving in the spirit of helping those in need.

Among those 705 families eligible, there are 1,239 children. There are also 224 households with no children “living a sparse lifestyle,” Rohrs said.

On Monday, Rohrs said everything was coming together nicely. About 150 volunteers are on hand each day of Christmas Cheer. That total includes members of area churches, students including the Pettisville FFA, retirees, and others.

“Then, in this one building, it all comes together,” she said.