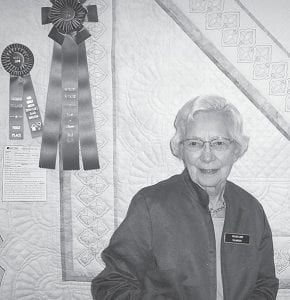 Velma Kamp, Archbold, with her quilt, featuring a design inspired by decorative tiles found in Uzbekistan. The quilt won Best of Show and a people’s choice award during the annual Sauder Village Quilt Show, May 1-6. Approximately 400 quilts were shown during the event.– courtesy photo

For inspiration for her best-of-show quilt, Velma Kamp, Archbold, figuratively went halfway around the globe.

Kamp’s quilt, “Uzbek Porch Tile,” was chosen the best of show winner out of about 400 quilts on display at the 37th Sauder Village quilt show, May 1-6.

“My daughter, Marianne, was in Uzbekistan doing research for her dissertation. She teaches at the University of Wyoming,” Kamp said.

“The Uzbeks decorate everything with tiles. The design I picked for the center (of the quilt) was on a porch.”

“Then I needed something for the border.”

Again, she went back to the book and adapted another Uzbek design.

“The tiles were light green and blue. I matched them, or as close as I could come,” she said.

The central design of the quilt, a large cross, featured the appliqué technique in which bits of fabric making up the design were sewn on top of other pieces.

It also featured embroidery, in which thread is sewn into the quilt to create a design.

Kamp said she didn’t keep track of the time spent working on the quilt.

“I started it around four years ago, when I just did the center. Then I put it aside for a totally different quilt,” she said.

“Last year, around August, I started doing the embroidery. Then I put it together in January, and between January and April, did the quilting.”

Kamp said she didn’t think her quilt would win anything in the Sauder Village show.

“I didn’t think it was good enough. I know all of the little mistakes, and the places I could have done better. I guess I covered it up a bit,” she said.

The quilts on display at the Sauder Village show “were beautiful. The show was better than any I’ve seen.”

“I don’t believe I was any more deserving (of the best of show award) than anyone else,” she said.

When Marianne, who was in Archbold for the show, learned her mother’s quilt was named best of show, she posted a picture of it on a social media website.

One of Marianne’s students from Uzbekistan immediately posted a comment.

“She thanked me for honoring her country by using their design,” Kamp said, adding she was glad the student didn’t take her use of the design as an insult.

Kamp said when her youngest daughter Rebecca saw the quilt, “She said, ‘You’re not giving that one away, are you?”

Television has done much for psychiatry by spreading information about it, as well as con-tributing to the need for it. – Alfred Hitchcock