by Nanette Buehrer Special to the Buckeye 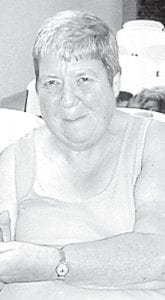 Sadie Roth, a resident of the Fairlawn Haven retirement campus, lost over 190 pounds through exercise and healthy eating. Her advice? “Don’t give up. It can be done, but it takes time.”– courtesy photo

On a popular TV weight loss show, overweight contestants are given every conceivable advantage, and attain amazing results.

Most severely overweight Americans will never have such an opportunity. For them, shedding pounds can seem impossible.

But one Archbold woman has proved it can be done. Sadie Roth, 65, Archbold, dropped 194 pounds over the last three years.

She knew it could be done, though she had a few obstacles along the way.

As happens with most people, Roth gained weight gradually.

Moving to Archbold in 1993, she held various jobs, which kept her active. While still working, her husband became ill, and Sadie stayed home more to care for him.

“I began eating more and exercising less,” she said.

Her husband died. Sadie found it hard to cook for one person, and turned to lots of processed foods.

The combination caused Sadie’s weight to balloon to the point her doctor suggested weight loss surgery. She needed to lose 200 pounds.

After her physician suggested surgery a second time, Sadie said “no way” and began plotting her path to weight loss.

Roth encouraged a friend to join a weight loss group with her. The leader stressed watching food portion sizes, gave preparation tips to make healthy food taste good, and said to try a variety of foods.

Moving was the second big factor needed to lose weight. Just walking was difficult for Roth. Her knees are not good, and her physician said for every pound lost, it could take four pounds of pressure off them.

As the weight slowly came off, Roth was also recovering from foot surgery and could do no weight-bearing exercises.

The answer for Roth was right around the corner from her apartment.

She began using the recumbent stepper for just ten minutes a day. It took her over a year to attempt to walk the track just once, but today, she walks the track six times before taking a breather.

What is more astonishing is that Sadie still needs a pronged cane for stability. It doesn’t stop her from an exercise routine of one hour on the stepper, followed by 12 times around the track– just over a half mile– every morning.

Three days a week she goes an extra half hour on the stepper, four miles on the stationary bike, uses the weight machine, and then walks 12 more laps around the track.

Roth hit her goal weight of losing 194 pounds on March 18.

She continues to slowly lose weight by eating smaller portions, eating lots of fruits and veggies, and cutting down on soda.

Her advice to others?

Roth’s weight loss over three years is a testament to “slow and sure wins the race.” She also says to learn to say “no” to temptations and be assertive when dining out or eating at friends and family gatherings.

“It is a little over three miles. I plan to walk in spirit with them by riding the exercise bike the equivalent of the 5K run,” she said.

Roth didn’t have the advantages of the TV weight loss show contestants, but to her physician and friends, she is indeed a “Big Loser.”