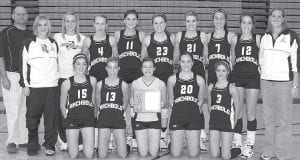 AHS has won the invitational nine times since it began in 1995.

“Otsego’s got a pretty good program, but we came out and played really well,” said Dale Grime, AHS co-head coach. “We served aggressive, and just did a nice job hitting and blocking on them.

“Against Tinora we did some good things too. We really focused on attacking the ball at them and ran a quick offense at them to get them out of their game. 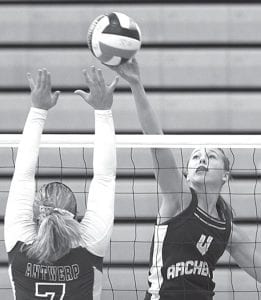 Becca Gerig (4) tips the ball over the outstretched hands of Antwerp’s Jessie Arnold in the championship match of the Streak Spike-Tacular, Saturday, Oct. 2. The AHS freshman had 13 kills in the battle for the tournament title with the Archers, which the Streaks won 25-22, 25-27, 25-22.–photo by Mary Huber

“We did a lot of subbing (substituting) in, which really helped us today.”

With Alyssa Schaub, Laura Short, and Megan Gerig out for the season due to injuries, “we brought up three JV players– Darian Oberlin, Jenny Lehman, and Taylor Coressel,” said Grime.

“We went from a 5-1 offense with Sarah Wyse setting to a 6-2 offense to give her more time to focus on her sets.”

The Streaks jumped out to an 8-2 lead in the first game, but the Archers climbed back to within four, 11-7. Two straight kills by Tori Winslow closed the gap to 11-9. After Archbold got a side out for a 12-9 lead, Vail had three straight kills to tie the score.

The game remained tight the rest of the way. AJ Stuck served an ace to give Antwerp a 20-18 lead. Grime called a time-out to settle his players down.

The Streaks came back and got a 21-20 lead when a spike into the net gave the side out to the Archers. Antwerp tied the score, but then Lehman spiked through Antwerp’s block to get the side out.

A kill by Nicole Hurst gave Archbold a 23-21 lead. Amy Hammer called a time-out for Antwerp.

The Streaks led 14-6 in the second game when the Archers started their comeback. Archbold was at match point, 24-21, when the side out went to the Archers.

Archbold still led by one, 24-23, but a spike that went wide gave the point and side out to Antwerp with the score tied at 24.

After an Archbold timeout, the Archers got the upper hand, 25-24, when a Streak block failed. Hurst tied the score at 25 with a tip over the net.

Antwerp came back with a kill by Vail, and sealed the game when Archbold’s spike went into the net for a 27-25 victory.

The lead went back and forth in game three as neither team led by more than three points at any time.

The Streaks got to match point, 24-22, when Antwerp’s block of Lehman’s spike went out of bounds, and won with a Lehman block on the match’s final play.

Tinora won the JV tournament. Antwerp was second, Paulding was third, and Archbold was fourth.