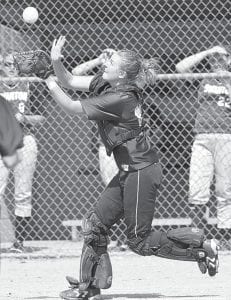 Catcher Morgan Ducey catches the first out of the game. The Streaks easily defeated Swanton, 21-0.– photo by Mary Huber

The Archbold softball team clinched the Northwest Ohio Athletic League title outright with a 9-3 victory over Liberty Center, Monday, May 10.

The Streaks followed the league title with a Division III sectional championship, defeating Swanton 21-0, Saturday, May 15, at AHS.

Evergreen (18-8) played Parkway (12-8), yesterday, Tuesday, in the other district semifinal at Lima Bath.

Winners play for the district championship, Saturday, May 22, 12 p.m., at Lima Bath.

The Streaks scored four runs in the second inning and went on to defeat the Tigers 9-3. The win completes a perfect 8-0 mark in the NWOAL.

Courtney Day and Morgan Cody each went 3-4 including a home run for Day and a double for Cody. Jenna Nofziger hit two doubles while Abbey Graber added two hits. 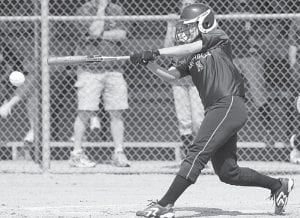 Alyssa Schaub hits a single in the first inning of Archbold’s sectional final with Swanton. After stealing second she was brought home by a Sarah Wyse double.–photo by Mary Huber

Lex Campos pitched five innings to pick up the win on the mound. She gave up one run on three hits while striking out 10. Sarah Wyse pitched two innings and struck out two.

“It was nice to be able to win the NWOAL title by ourselves,” said Joe Frank, AHS head coach.

“One of our goals is always to win the title, and we have reached that goal. We have some bigger goals ahead to shoot for.”

The Blue Streaks captured the sectional title with a convincing win over the Bulldogs.

Archbold completely dominated, scoring all of its runs in the first three innings.

Archbold bats were sizzling as they collected 23 hits in the contest.

Leading the way was Nofziger, who went 2-2 with a double and a grand slam home run. Devin Newman also went 2-3 with a threerun homer.

The Bulldogs were completely shut down by the pitching of Sarah Wyse and Campos. An infield single was the only hit collected by the Bulldogs while they struck out eight times.

“We came out and played a very good game today,” said Frank.

“I was very pleased with our focus in this game. We have a group of young ladies that do not want this season to end just yet.

“Hopefully we can maintain this focus and continue to play well in the district tourney next week.”