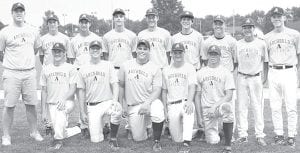 It was the third straight time the Streaks battled with the Indians in the double elimination tournament. Archbold won two of the three.

Aaron Wyse pitched in relief of starter Aaron Bontrager in the third inning. He shut the Indians down until tiring in the sixth.

Tanner Wyse changed out of his catcher’s gear, and came in to get the save in the last inning.

T. Wyse had a big game. He had three hits, picked a runner off first base from his catching position, and was very effective on the mound.

Ben Miller added two hits, while Zach Driver had a double that drove in two runs.

The Blue Streaks blistered Wauseon 13-2 in the finals of the winner’s bracket, Wednesday, July 7. Garrett Morton had two hits and three runs batted in, while A. Wyse added two hits. 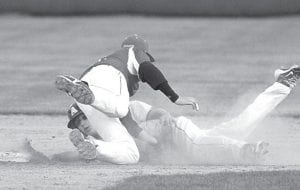 Jase Grosjean kicks up a cloud of dust trying to steal second base in the bottom of the sixth inning against Wauseon. He was tagged out, but the Blue Streaks won the Fulton County sectional championship with a 7-4 victory over the Indians, Sunday, July 11.– photo by Mary Huber

Tyson Dietrich had a double and two RBIs.

B. Miller ended the game in the fifth inning with a three-run shot over the left field fence.

T. Wyse was the winning pitcher.

Wauseon bounced back by defeating Pettisville in the fi- nals of the loser’s bracket on Friday, July 9.

The Indians continued their winning ways by beating Archbold 4-1 on Saturday, July 10, to force the Sunday game against Archbold to determine the sectional champion.

Dietrich and Miller combined on a two-hitter, but it wasn’t good enough as errors plagued the Streaks.

Archbold gains the number one seed from Fulton County for the district tournament, July 13-17 at Defiance High School and at Bryan. The Streaks were scheduled to play Tinora last night. Wauseon advances as the number two seed.

Aaron Wyse winds up to pitch against Wauseon. He relieved starter Aaron Bontrager in the third inning, then was replaced by Tanner Wyse in the sixth. Archbold was scheduled to play Tinora last night, Tuesday, in district action at Defiance.– photo by Mary Huber