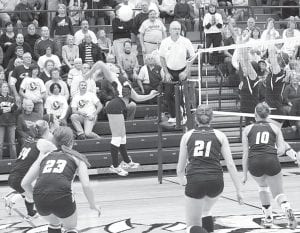 Top: With many Blue Streak fans anticipating an impending district championship, Devin Newman spikes the ball at match point. The ball bounced off the hands of Parkway blockers Hannah Harshman and Emily Crowell and was unreturnable, giving AHS a 25-15 fourth-game victory and the district title. At right: Newman, her teammates, and Archbold fans celebrate Archbold’s 24th district championship. The Streaks are 26-0 as they return to the regional tournament for the first time since 2002.–photos by Mary Huber and Scott Schultz

How sweet it is!

Neither team led by more than four points in the first game; and each time that happened, the other team scrapped its way back to a tie.

The score was tied at 15 when a kill by Kelsey Bates and two straight aces by Emily Crowell gave Parkway a 17-15 lead.

The Streaks came back to lead 20-19 when Archbold served the ball into the net.

A setting and a spiking error put the Panthers ahead, 22-20, and Nofziger called another time-out. A spike by Bates went off the Archbold blockers’ hands, which was followed by a Bates kill, putting Parkway at game point, 24-20. 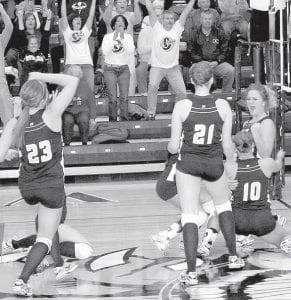 Devin Newman hit a spike that went off the blockers’ hands, and Stacy Wyse tipped the ball over the net to close the gap to 24-22.

But Bates ended the first game with a kill, giving Parkway a 25-22 win.

“We didn’t expect anything different from what they showed out there,” said Julie Nofziger, AHS head coach.

“We knew that they’d go to their middles (middle hitters). We tried to make some adjustments and didn’t quite get the adjustments made.

“We played a little bit soft, a little bit tentative, but once we started to come out and go aggressive, we just felt that they couldn’t match up with us along the front row. That was the difference.”

It was only the second time AHS lost the first game of a match this season.

The first time was against Springfield at the Golden Spike Tournament, Sept. 26.

Archbold slowly started to take control of the match in the second game. The Streaks led the entire game, and turned an 11-10 gap into an 18-10 hole the Panthers couldn’t claw their way out of.

Leading 19-11, Wyse stepped up to serve. Two aces, a double block, a spiking error, and a serve reception error later, Archbold was at game point, 24-11.

Parkway scored a point, but Emily Snyder and Hailey Galvan blocked Claire Burtch’s spike to put the second game away, 25-12.

The momentum had swung to Archbold’s side.

“Parkway just did a great job making adjustments and picking holes. They just couldn’t find it when we were tied or one up.”

With both teams fighting hard, there were frequent long rallies throughout the match, as neither team wanted the ball to hit the floor on their side of the court.

Two Parkway points were wiped out, a point and serve were awarded to Archbold, and all of a sudden the Streaks led 12-7.

Archbold extended the lead to eight, 20-12, when a Blue Streak serve was long. But AHS got the serve right back when Alyssa Schaub’s spike was unsuccessfully blocked.

A Newman kill gave AHS a 22-13 lead, but an error gave the side out to Parkway. The Panthers gave AHS the serve right back at 23-14 when Burtch missed her serve.

Crowell’s spike went out of bounds, putting AHS at match point, 24-14, and the AHS crowd was on its feet.

The fans were momentarily silenced when Parkway got the side out, but Newman scored Archbold’s final point with a spike that was partially blocked.

The Panthers were unable to save the play, giving AHS the 25-15 fourth-game and match victory.