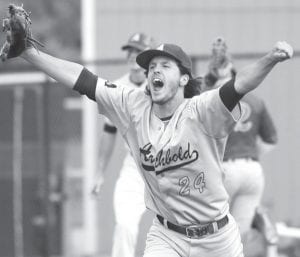 Pitcher Lathon Babcock celebrates after throwing a four-hit shutout to defeat Tinora 2-0 in the district championship game, Saturday, May 21.– photo by Mary Huber

Babcock (5-2) fired a four-hit shutout at the Rams, a team that has had a lot of success in recent years, including four consecutive trips to the state tournament, with one resulting in a state championship.

“What a tremendous job of bouncing back after getting hit hard in the district semifinal game against Fairview,” said Selgo.

“Lathon didn’t let that faze him one bit. He put that behind him, and came out and completely shut down a very good Tinora team.

“As usual, the senior left-hander’s control was excellent, as he walked only one batter.

“He also had a lot of support from the defense, as they did not commit an error for the third consecutive game.” 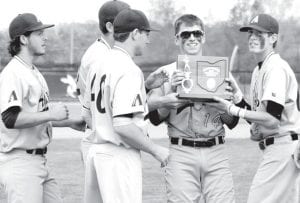 Shortstop Derek Walker pulled off one of the biggest plays of the game, as he alertly tagged out the potential tying run wandering off second base in the sixth inning.

Archbold scored what proved to be the only run it would need in the second inning. Ian Radabaugh and Babcock ripped back-to-back singles, with Babcock’s hit driving Radabaugh to third base.

Senior first baseman Seth Mayer then hit a deep fly to center, allowing Radabaugh to tag up and score.

Toby Walker led off the sixth with a double and scored on a throwing error by the Rams on a ground ball off the bat of Bryce Williams to give the Streaks their second run.

“It’s really satisfying to see this team be able to enjoy a trip to the regional tournament,” said Selgo.

“They have worked hard, and give it everything they have, every game.”

Winners play for the regional championship and a trip to the Final Four, Friday, May 27, 5 pm, at Elida.