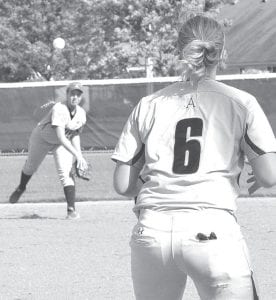 Emie Peterson fields the ball and throws to first baseman Cassi Wyse for an out against Swanton in their Div. III sectional final.– photo by Mario Gomez

Archbold punched its ticket to the Division III district softball semifinals with a hard-fought 4-1 win over Swanton (8-12), Friday, May 13, at Archbold.

It is the 11th straight sectional championship for AHS (16-5).

The Streaks had some chances to break the game open early but could not come up with the big hit.

Payton Dickman, who had earlier doubled, scored on a single off the bat of Cassi Wyse to make it 1-0 in the first inning.

Swanton made it a 2-1 game in the fifth with a solo homer before Archbold responded with a run of its own in the bottom of the inning. Payton Robinson’s two-out double plated Nafziger to make it 3-1.

Archbold added an insurance run in the sixth thanks to a walk, stolen base, and an error on a bunt.

Robinson tossed a three-hitter while striking out three and walking none.

Nafziger was the only Streak with more than one hit, going 2-4.

“It is tourney time, and strange things can occur at this stage of the season,” said Joe Frank, AHS head coach.

“We are in the survive and advance mode, and that is what we did today.

“Swanton played a solid game against us. We will have to step up our play to be successful at the district level.

“Elmwood played us in an 11-inning contest earlier this season (Archbold won 7- 6 on April 23), and I expect another close game this time around.”

Winners play for the district title, Saturday, May 21, 12 pm, at Maumee.