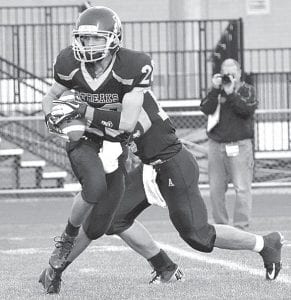 Levi Wyse (20) takes the handoff and runs 75 yards for Archbold’s first touchdown against Montpelier. The sophomore also scored on runs of 58 and 70 yards.– photo by Mario Gomez

Homecoming could not have gone any better for the Archbold football team when the Streaks hosted Montpelier, Friday, Sept. 28 in Northwest Ohio Athletic League action.

Archbold’s 76 points tied with the 2010 game against Montpelier for most points scored in a single game (when the Streaks won 76- 8).

“We had big plays to start us off on offense and special teams play, also,” said Bryan Miller, AHS head coach.

“It was just good to get off to a good start and avoid what happened to us last week against Swanton.”

The Locos took the opening kickoff and chewed four minutes off the clock before their drive stalled on the Archbold 25-yard line.

One play later and 75 yards downfield, Levi Wyse crossed the goal line to give Archbold a 7-0 lead. 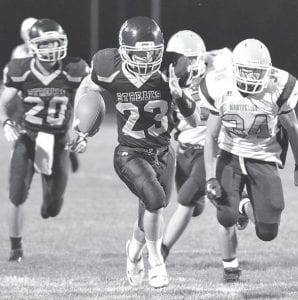 Lincoln Parsley (23) sprints 36 yards to the end zone on a pass from quarterback Evan Wyse to give AHS a 34-7 lead. He also scored on a 49-yard pass to end the second quarter and a 69- yard kickoff return in the third.– photo by Mario Gomez

L. Wyse led the Streaks in rushing, totaling 203 yards on three carries. He also scored on runs of 58 and 70 yards.

Montpelier came right back and knotted the score at 7 when signal caller Tyler Benner connected with Raymon Moreno for a 5-yard touchdown pass. The TD capped off an 11-play drive that took 6:34 off the clock.

After that TD, the AHS defense shut out the Locomotives until late in the fourth quarter; but for the Blue and Gold, it was a night for big plays.

Taking the kickoff after Montpelier’s touchdown, Jase Grosjean raced 84 yards for a touchdown, putting him in the fifth spot for longest kickoff return in school history.

TJ Gerken holds the record, scoring on a 96-yard run in 2010 against Liberty Center.

In Archbold history, only 17 times has a kickoff been run back for a touchdown.

Lincoln Parsley also got into the record book with a 69-yard kickoff return in the third quarter.

Jase Grosjean scores the Blue Streaks’ second touchdown on an 84-yard kickoff return with 2:47 left in the first quarter.– photo by Mario Gomez

He also led the receiving core with two catches for 85 yards and two more touchdowns.

Quarterback Evan Wyse was a perfect 4-4 in passing for 125 yards.

Tyson Dietrich also crossed the goal line in the second quarter when he intercepted a pass and scampered 31 yards for the score.

Sam Grime is at the top of the record books, returning an interception 94 yards against Delta in 1966.

Montpelier held the edge in time of possession with 29 minutes, 38 seconds, while the Streaks had possession for 18:22.