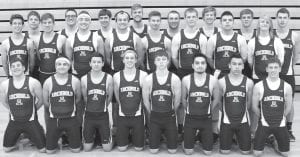 Dina Gladieux, Archbold head track coach, is in her sixth year at the helm of the Archbold boys and girls track teams, and had 20 years of experience as an assistant coach.

Both teams have “positive leadership with state-level experience,” she said.

It’s not just last season that provided state experience, but multiple years of experience that will guide the Streaks to another successful season.

Rounding out the returnees on the boys side are Isaiah Esquibel (pole vault/ sprints); Jacob Rodriguez (distance); Lukas Rodriguez (mid-distance);

“Caden Garrow, a freshman, participated in the indoor track season, where he qualified to the indoor state meet in the 4×800 and 4×400,” said Gladieux.

Ten freshmen and one se- nior, our German exchange student, came out.

“During the indoor track season, I was able to work with Gwynne Riley, Dakota Stamm and Kennedy Miller,” said Gladieux. “These three, along with Maura Riley, qualified to the indoor state meet in the 4×800.

“This will be an exciting season.

“We have a number of athletes returning with state experience, both indoor and outdoor.

“We are a young team with lots of heart. Heart is what keeps them working hard through each and every practice, preparing to give their best effort every time they compete.

“With that said, our overall numbers are decreasing. There are so many options for young athletes these days; they are spread very thin.

“When they get to high school it is time to make a choice, and track is often cut.

“We continue to work on strengthening our field events.”

The Streaks are scheduled to open their season at the Napoleon Early Bird Invitational, Saturday, March 26.