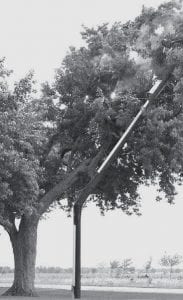 Archbold firefighters watched as sparks and flames lit up this tree along Co. Rd. 22, north of Co. Rd. C, near the home of Mindy Borer, who took the photo. Borer said the pole was damaged by an earlier motor vehicle accident. Then high winds Friday, Aug. 24 caused it to break, and the top fell into the tree.- courtesy photo

Bob Hartman, of the Fulton County emergency management agency, said he set off tornado sirens in Fulton County about 6:15 pm Friday evening, Aug. 24, based on a number of factors, including an unconfirmed tornado report.

Hartman said Monday he received a call from the Fulton County Sheriff Department dispatch center; the center had received a report of a tornado that was on the ground near Archbold Elevator.

He said the report wasn’t from a trained weather spotter, making it an unconfirmed report.

But, Hartman said the unconfirmed report was backed up by severe thunderstorm warnings from the National Weather Service, plus reports of severe weather in neighboring Williams County.

“We had a unit one mile west (of Co. Rd. 24 and the Archbold Elevator) and there were some low-hanging clouds, but they didn’t see any rotation,” Brodbeck said.

While trained spotters did not see a tornado, Hartman said to save time, he decided to sound the sirens.

The sirens were sounded countywide, he said, so everyone would be aware of the weather situation.

He said the goal of the sirens “is to get people who are outside, inside, to listen to the radio, the TV, to pick up information, and get a little bit of warning,” he said.

“It just made sense” to set off the sirens, he said.

A utility pole, which had been damaged in an earlier motorvehicle accident, was broken off, sending electrical lines into a tree on Co. Rd. 22 north of Co. Rd. C. That resulted in a tree fire, but AFD firefighters couldn’t respond to the blaze until Toledo Edison crews arrived.

Brodbeck said there was no other damage related to the Friday storm.