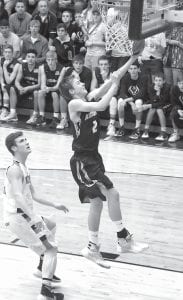 Above: Bryce Williams speeds past a Van Buren Black Knight for a layup in their Div. III district semifinal. Right: Mike Weigand eyes the basket and beats a defender while driving the baseline.– photos by Scott Schultz

Archbold (16-8) used a stanch zone defense in the second half and went on a pair of runs to topple the Van Buren Black Knights (18-6) 61-56 in a Division III district boys basketball semifinal, Thursday, March 3.

The first half was a track meet, with the Black Knights controlling the inside game and building a 17-15 first-quarter lead which they extended to 33-25 at the half.

The second half belonged to Archbold.

Bryce Williams started the Streaks in the third with a deuce to narrow the gap to 33-27, but the Black Knights answered with a three-pointer from Riley Adolph and a deuce from Ryan Turner to lead 38-27 at the 6:40 mark.

Trailing by 11 points, Archbold dropped back into a 2-3 zone and shut down the Knights’ inside game.

Offensively the Blue and Gold rolled. Mike Weigand hit two at the charity stripe to start a 10-0 run.

Marcus Brand finally broke the scoring drought for Van Buren at the 3:07 mark with the Streaks trailing by only three, 40-37. 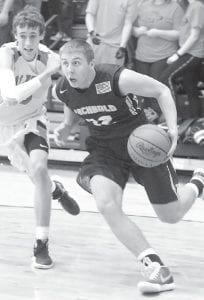 Archbold took a 42-40 lead on a put-back from Derek Walker.

Van Buren answered with a deuce to knot the score at 42.

Then the Streaks went on a 13-0 run that spanned the end of the third and midway into the fourth to build a 55- 42 advantage with 3:29 left.

Not ready to have their season end, the Knights went on an 8-0 run to close the gap to 55-50, but that’s as close as they would get as both squads exchanged buckets for the remainder of the contest.

“This was a hard-fought contest. We knew going in they had some quality athletes and they do some real nice things,” said Doug Krauss, AHS head coach.

“We were guarding their guys pretty well, and boom, boom, boom, things didn’t look too good in that third quarter.

“Joe (Frank, junior varsity coach) looked up to the clock and said they have 38 points against our man(to man defense); a zone defense can’t hurt any.

“So we tried it, and the tide turned in our favor, so credit coach Frank on that call. 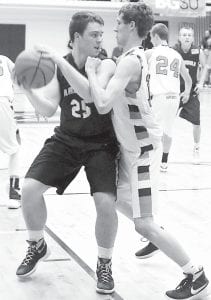 “We tell our guys on the bench I don’t care if you play for one minute, two minutes, or 30 seconds, you have to give us your best, and our kids do that, and Derek Walker epitomizes that.”

Williams paced the Streaks with 23 points. Michael Weigand and Kaiden Bedsole chipped in 13 and 12 points, respectively.

Adolph and Turner led the Knights with 17 and 14 points, respectively.