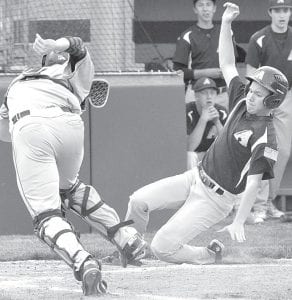 Trevor Rupp beats the throw to home to score in Archbold’s 11- 1 victory over Evergreen in their Div. III sectional final.– photo by Mario Gomez

Archbold made the short trek to neighboring Pettisville (3-12), Monday, May 9, for a non-league baseball contest in which the Streaks pounded out 12 hits in a 13-2 victory.

Trevor Rupp (3-0) recorded the win, giving up one run on three hits, striking out three, and walking none.

Evan King suffered the loss, giving up nine runs on ten hits, striking out one, and walking one.

Archbold exploded for seven runs in the first inning, Friday, May 13, to lay claim to a Division III sectional title against the Vikings (7-18) with an 11-1 win at Archbold.

The Streaks (18-7) added one run in the third and three in the fifth for an 11-1 drubbing of the Vikings.

Lathon Babcock recorded the win, giving up one run on two hits, striking out five, and walking three.

The top-seeded Streaks square off against thirdseeded Fairview (15-6) in a district semifinal game, tomorrow, Thursday, 2 p.m., at Defiance College.

Winners play for the district championship, Saturday, May 21, 1 p.m.