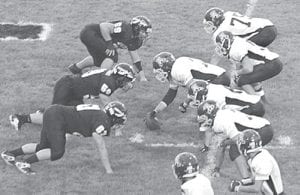 The Blue Steak offense lines up for a snap against Fairview, Friday, Sept. 7. Archbold compiled 519 yards of total offense in the 37-14 non-league victory.– photo by Scott Schultz

After a sluggish first half, Archbold put up 27 unanswered points in the second half and coasted to a 37-14 non-league football win over Fairview, Friday, Sept. 7, at Fairview.

Archbold took the opening kickoff, but it was not the start the Blue and Gold was looking for.

Levi Wyse lost the handle on the football on the first play and Fairview recovered the ball on the Streaks’ 27- yard line.

Archbold got a second chance when the Apaches returned the favor as Matt Tobin coughed up the ball.

The Apaches put the first points on the board when Robinson connected with Jeffery Timbrook for a 25- yard touchdown toss.

The Apaches converted the two-point conversion as the first quarter came to a close.

Archbold bounced right back with E. Wyse leading the charge on a 23-yard touchdown run. The twopoint point-after-touchdown run came up short, and the Apaches held an 8-6 lead.

Archbold took its first lead when Tyson Dietrich picked off a Robinson pass. The Streaks settled for a Lincoln Parsley 26-yard field goal to go up 9-8 with 9:52 left in the second quarter.

Fairview scored for the last time at the 4:02 mark of the second quarter on a Timbrook 4-yard run, giving the Apaches a 14-9 halftime lead.

It wasn’t just the AHS offense that clicked in the second half; the defense came out of the blocks firing and shut out its host.

The Apaches finished with 201 yards of total offense while the Blue and Gold compiled 519 yards.

E. Wyse threw one touchdown and rushed for two to lead the Streaks, while Parsley had five receptions for 108 yards to lead the aerial attack.

Parsley kicked a 42-yard field goal in the third quarter to close the gap to 14-12. The kick ties him with Sam Speer and Paul Thatcher for the longest field goal in Archbold football history.

Thatcher kicked his against Evergreen in 1985, while Speer’s was against Swanton in 2001.

Dietrich added two more scores in the second half on runs of 31 and 1 yard, while Wyse added a 38-yard run in the win.

“We told the kids at halftime we are our own worst enemies at times,” said Bryan Miller, AHS head coach.

“The difference in the second half was, we got out of our own way and stopped making all those mistakes that held us back in the first half.