Archbold Topples Delta, Stays In The Hunt For League Crown 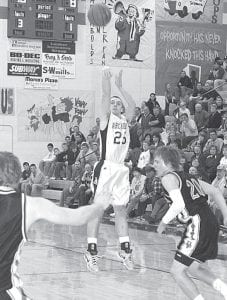 Christian Goering shoots from downtown Archbold in the Blue Streaks’ contest with Delta. Archbold is 6-1 in the NWOAL with one league game remaining.– photo by Scott Schultz

“This was just a great effort on our guys’ part,” said Doug Krauss, AHS head coach. “Delta has some nice athletes, but I thought we could put some heat on them. We covered them pretty well tonight.”

Early in the contest it appeared the game would go down to the wire.

Telly Fricke nailed a threepointer to start the Streaks, but the Panthers, hungry for a league championship, scored on back-to-back buckets by Blake Green.

The squads went back and forth the rest of the quarter. Archbold got a spark off the bench in the first period’s closing minutes that carried over to the second. Coming off the bench, Sam Miller converted a conventional three with just three seconds left to end the first period with a 13-11 lead.

Jeremy Navarro made the only Panther points of the second quarter, nailing a three in front of the Archbold bench.

Miller answered with a deuce and Corey Walker added one from the charity line.

Miller hit again and teammate Garrett Morton buried a three from the corner. Luke Kammeyer got into the action and hit a pair at the charity stripe, capping off a 10-3 run and a 23-14 lead at the midway point.

Miller paced Archbold with 15 points. Fricke and Kammeyer chipped in nine each.

“ Give Sam (Miller) a lot of credit,” said Krauss. “He has worked hard this year.

“Sam has been coming off an injury from last fall. He has kept a great attitude through it all, and it’s really nice to see him come out tonight and play well.”

“We were stuck on 14 for a long time,” said Sprow. “One field goal– you’re not going to win big games. You’re not even going to stay in big games. Fortunately, I thought we were within reach at halftime. We just can’t turn the ball over 19 times and shoot 20 percent.

“Give credit to the Archbold defense that got after us and took us out of our comfort zone.”

The Streaks continued to pour it on in the third. Morton hit back-to-back buckets, then Miller scored the next five points to push the gap to 32-17.

Delta scored four quick points. Jordan Turner, who led Delta with 10 points, connected on a conventional three, and Nate Jackson added one from the foul line.

Kammeyer came up with a steal and led the Streaks on a fast break, spotting an open Collin Walker for two more.

Christian Goering added a three to close out the third. The Streaks had a comfortable 37-23 advantage heading into the fourth.

The Panthers’ woes continued as Corey Walker capped off a 12-0 run that spanned the third and into the fourth quarter.

The Panthers didn’t come up with a bucket until the 4:30 mark when Turner hit a jumper.

The Streaks control their own destiny in the NWOAL race.

With a victory at Bryan, Friday, Feb. 26, Archbold wins the NWOAL title outright.

Evergreen and Delta finished the league season with 6-2 records, while Bryan and Wauseon are 5-2 with one game left. The Golden Bears defeated the Vikings 58-48 last week to drop Evergreen out of a tie for first place.

If Wauseon beats Montpelier on Thursday and Bryan defeats Archbold on Friday, it will be a five-way tie for the league crown.