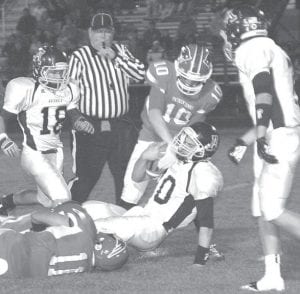 With emotions running high on the Archbold sideline and a 14-0 lead after the first quarter, the Streaks dominated state-ranked Patrick Henry, 51-22, Friday, Oct. 12, at PHHS.

The Blue and Gold raised their Northwest Ohio Athletic League record to 5-1, 7-1 overall.

The Patriots, ranked seventh in Division V by the Associated Press and still stinging from an Oct. 5 loss to Bryan, fell to 6-2, 5-2 NWOAL.

“This was a great night for us,” said Bryan Miller, AHS head coach. “We were just super pumped up coming in here.

“We knew it would be a tough game. (I’m) extremely happy the way the kids played from the get-go and never backed down.”

PH opened the game with a nine-play drive that stalled on the Streaks’ 22-yard line.

Facing a fourth-and-3, the Pats handed off to Tobey Hernandez, their star running back.

The AHS defense stopped the fullback short of a first down, and PH turned the ball over.

Archbold, known for its spread offense, went right to work on the ground. The Streaks chewed more than three minutes off the clock and capped off the 12-play drive with an Evan Wyse-to- Tyson Lersch 41-yard touchdown toss.

Archbold added another score just minutes later. Gabe Jones fumbled on PH’s own 11-yard line, and Archbold recovered on the 4.

One play later, Tyson Dietrich crossed the goal line and increased the lead to 14- 0.

Staying on the ground, the Streaks took Archbold to the Patriots’ 25-yard line behind Dietrich and E. Wyse.

E. Wyse dropped back and connected with Dietrich for a 25-yard touchdown toss and a commanding 21-0 lead with 11:48 left in the second quarter.

“The offensive line and defensive line were a huge key to our success tonight,” said Miller.

“PH’s lines on both sides of the ball are great, and we knew coming into the game if we couldn’t handle their line we would have a long night ahead of us.

“Our lines just played the lights out.”

In between, Dietrich scored on a 2-yard TD run with 3:09 remaining.

Archbold took the opening kickoff to start the second half. Staying on the ground, the Streaks chewed off over seven minutes before Dietrich scored on a 1-yard run.

The AHS defense continued to shut down the Patriots, holding its host scoreless in the third quarter.

It was the defense’s turn to score when Quinton Ranzau picked up a Jones fumble and scampered into the end zone from 26 yards out for a 48-14 lead.

Ranzau’s return places him third on the all-time AHS list for fumble recoveries for touchdowns.

Lincoln Parsley added a 38-yard field goal in the fourth for Archbold.

An 18-yard pass from Jones to Nye gave PH its fi- nal touchdown.

“The turnovers were huge, and getting that one inside the 10 (in the first quarter) to set up the touchdown– turnovers were the difference,” said Miller.

“We stressed all week that we have to take care of the football, and we were fortunate enough to get the opportunities ourselves.”