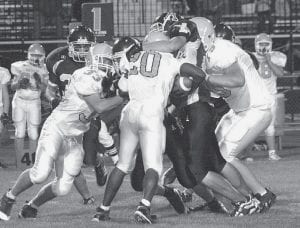 Montpelier’s David Ratliff (20) tries to plow his way through an Archbold defensive wall. Ratliff ran 70 yards for a touchdown on the second play of Montpelier’s opening drive.- photo by Scott Schultz

The Streaks, rated third in Division V by the Associated Press, stay perfect at 6-0, 4-0 in the Northwest Ohio Athletic League.

AHS sits atop the Div. V Region 18-1 Ohio High School Athletic Association computer ratings with 9.55 points. Patrick Henry (5-0) is second with 7.7; the Patriots are rated second in Div. V by the AP.

Montpelier, under Joe Brigel, head coach, came chugging into town looking to surprise the Streaks. The Locos opened a few eyes after taking the opening kickoff when, on the second play from scrimmage, David Ratcliff raced 70 yards for a score.

Making just his second start at quarterback, junior Kyle Mc- Carty connected with Ryan Miser for a two-point conversion and an 8-0 lead.

It didn’t take long for the Streaks to get right back in the game, as they scored the next three touchdowns. Jake Fidler scored on runs of 2 and 56 yards, and senior quarterback David Rupp added a 71-yard run for a 19-8 lead.

Fidler crossed the goal line one more time in the first half.

McCarty kept things close for the Locomotives, scoring on a 26-yard run. AHS took a 25-14 advantage into the locker room.

“I told the kids this past week- and I have said it all year- I think Archbold is the best team in the NWOAL,” said Brigel.

“That is no disrespect to any other team, but I truly think athletically they are as good as anyone in this league. They have players in all spots and are tough to defend.”

It was all Archbold in the second half, with Rupp crossing the goal line three times.

McCarty closed the scoring for Montpelier on a 50-yard run in the final quarter.

Fidler finished with 188 yards rushing on 19 carries, while Rupp chewed up 155 yards on 14 carries.

“We are pleased,” said Brigel. “We are starting to scratch the surface of this team.

“I have said all along, and I am sure people thought I was the craziest guy in the world, but this team has potential. They just have to believe and execute.

“We didn’t play a perfect game. We normally play good in minutes, but tonight we played good in lots of minutes. The kids worked hard.

“I look at the first three possessions of the second half. We gave Archbold good field position, and they converted on each one. That was the difference in the game.”

“We had some injuries and had some other guys in there tonight, and it was bad,” said John Downey, AHS head coach. “Give credit to Joe (Brigel) and his team- they played extremely hard. He should be very proud of his kids.

“Tip my hat to Montpelier. They did a tremendous job and we did a rotten job. Montpelier was outmanned at every spot and they battled us. That’s a credit to them and a black mark on us.”