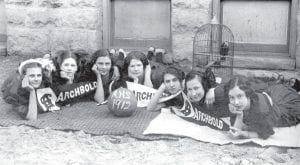 Among other things, the Archbold Area School District is known for the athletic prowess of its student-athletes.

We dug into the archives of the Archbold Buckeye and found these memorable sports moments in Archbold history. There are many, many more, of course; we encourage readers to share their memories on our Facebook page.

AHS volleyball, coached by Char Sharp, won its first state championship in 1978 when the Streaks captured the Class A title.

John Downey’s AHS football teams dominated the 1980s, but it was not until 1988 that Archbold won its only state championship, a 42-14 drubbing of Mogadore in the Div. V title game. 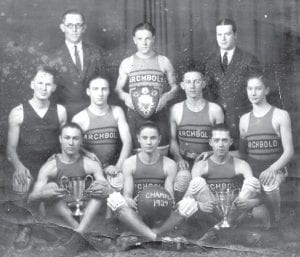 The 1978 Acme baseball team won its first state championship by defeating Greenville 12-8 in the state tournament.

Archbold has been well represented with outstanding individual performances at state tournaments, resulting in a number of track and field championships.

The first recorded state championship by an individual was in 1918 by Olen Grime, who won a state title in the discus at the Ohio state track championships.

Danny Young joined the list of state track champions in 2012, when he won the Div. III 300-meter hurdles.

Emily Roth, Meridith Short, Alicia Hernandez, and Jensyn Garrow took the gold in the 1600 relay in 2014.

John Jimenez became Archbold’s first representative to the state wrestling tournament in 1960. It was only the third year for the Archbold program.

In 1973, John Cowell put Archbold wrestling on the map with its first state championship.

Archbold’s last state champion had a familiar name when Jordan Cowell, son of John, won a state title in 2012.

The AHS golf program, led by Larry Lirot, had its first state representative in 1981 when Dan Plassman placed eighth in the state tournament.

Mark Stevens made trips to the state golf tournament in 1985 and 1986, placing 10th in his final appearance.

In 1997, Jesse Sensenig was the first Blue Streak to make a state tournament appearance in tennis. Andy Redd advanced to state in 2006.

Kinsey Smith was a gymnastics state qualifier in 2013, placed third in the floor exercise.

Boys Basketball: In the first official state tournament in 1923, Archbold played in the Class B tournament and lost in the semifinals.

The next season Archbold returned to the state tournament and made the finals, only to fall to Bellepoint 24- 20.

In 1979, Dan Neff brought the Streaks back to the state tournament and fell to eventual champion Dayton Jefferson in the semifinals.

Doug Krauss brought his number-one state-ranked Streaks to the state tournament in 1996. They defeated Bedford St. Peter Chanel in the semifinals before losing in the finals to Casstown Miami East to finish as state runners-up.

Football: The AHS football team made its first state playoff appearance in 1980.

The Streaks defeated Bucyrus Wynford for their first-ever playoff win before losing to Cincinnati Mariemont in the state semifinals.

Two years later, Archbold made it to the state championship game in Division IV, only to lose to West Jefferson 6-0 in what many Archbold fans called the “Mud Bowl.”

Archbold football has made the playoffs 11 times in team history.

Girls Basketball: The AHS girls basketball team made two trips to the state tournament. Char Sharp led her 1982 team to the Class A state tournament, losing in the semifinals to Buckeye Central.

Boys Soccer: The AHS boys soccer squad, under Sean Stewart, head coach, made it to the Div. III state semifinals in 2015, losing to Canfield South Range 1-0.

Golf: In 2008, Kevin “Sci- Fi” Miller coached his AHS golf team to a berth in the state tournament, where it placed ninth.

A few moments in Archbold sports history that stand out:

Feb. 1918: The AHS boys basketball team was invited to play in the Championship of Northern Ohio tournament in Delaware, Ohio under coach B.R. Mull, and lost to Mt. Vernon 23-20 in the finals.

Only eight teams were invited to compete. Archbold was the smallest team.

The game was played in 10-minute quarters and had a halftime score of 68-4. Orlan Whipple scored 89 points while John G. Clair contributed 54.

It was the final regular season game between the two teams until the rivalry was renewed 39 years later on December 15, 2007.

Rohrs rushed for 256 yards with three touchdowns while Peterson rushed for 234 yards and three scores.

Feb. 9&11, 1989: Archbold and Delta, the number one and -two ranked wrestling teams in the state, respectively, squared off at Delta High School in front of a standing-room-only crowd. Delta won 27-23 to win the dual portion of the Northwest Ohio Athletic League title.

Two days later, AHS ran away with the NWOAL tournament to share the championship with Delta.

Nov. 2, 1990: Archbold and Ayersville, the top small school football teams in the area, meet in the Div. V regional semifinals.

Mike Rolon ran for 194 yards and scored three touchdowns as the Streaks defeated the Pilots 23-13 to advance to the regional fi- nals.

During check-in before the race, a race day clerk had given Sauder no indication that her uniform, which consisted of multi-colored tights, was in violation of state rules.

With 11 seconds to go and the Wildcats leading 44- 41, Woodmore missed two free throws. Archbold’s Dan Borcherdt nailed a threepointer at the buzzer to send the game into overtime, where Archbold won 59-47.

AHS went on to win the regional finals to advance to state.

March 18, 2006: With the score tied at 54 against undefeated and third-ranked Johnstown-Monroe in the Div. III regional boys basketball final, David Borcherdt drilled a three-pointer to send Archbold back to the state tournament with a 57- 54 victory.

Best Of The Best

In the history of Archbold coaching, four coaches have achieved the ultimate honor of being inducted in the Ohio Coaches Hall Of Fame.