Chad Rufenacht, on top, attempts to turn Swanton’s Ben Roachmann on his back in their 152-lb. match, Thursday, Dec. 18. The AHS senior scored a technical fall over the Bulldog.- photo by Scot t Schultz

Archbold defeated Swanton 50-25 but lost to Wauseon 44-19 in the nightcap in a Northwest Ohio Athletic League wrestling quad meet at Wauseon, Thursday, Dec. 18.

“It would have been nice to win tonight,” said Brian Becher, AHS head coach. “But in the grand scheme of things, when we get to the end of the season this means absolutely nothing in my eyes. We want to get kids to advance to the district and state tournament.

“League titles are nice, but I am more focused on getting better and the things we need to do to get better.”

A much-improved Swanton squad was behind the eight ball early with four empty weight classes.

Wrestling started at 125 pounds, with Danny Young taking the first forfeit from Swanton. Jordan Cowell (130 lbs.) added a 16-4 major decision over Don Johnson for a 10-0 lead.

A Swanton forfeit at 135 lbs. added six more points for the Streaks. Trevor Meyer picked up a technical fall over TJ Burch at 140 lbs. 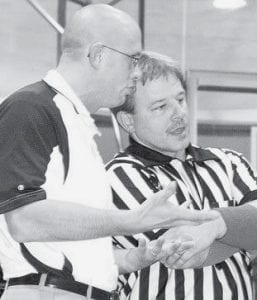 Brian Becher, AHS head coach, confers with an official during the match.- photo by Scott Schultz

Swanton picked up a win at 145 pounds, while Chad Rufenacht scored a technical fall over a pesky Ben Roachmann at 152 lbs.

Tyler Rufenacht got into the varsity lineup at 160 lbs. and faced Tom Leahey. Leahey recorded a 9-0 major decision over the determined AHS freshman.

Archbold filling its 14-person roster with Justin Allison joining the team, and took a forfeit at 103 lbs.

“Swanton has some decent kids,” said Becher. “I thought the kid that Chad (Rufenacht) wrestled seemed like a scrappy kid, and their heavyweight impressed me.”

The Indians have continued to get better and better each year, and the matchup between these two Fulton County neighbors looked to come down to the wire.

But the Indians strutted and muscled their way to a 44-19 victory.

The key matchup for the night was in the opening round, with Cowell squaring off against Carson Frey at 130 lbs. Cowell scored first on a takedown that held up for the period.

Frey started down in the second, with Cowell giving him the optional start for one point. Cowell went on to score seven points in the period on his way to a 13-2 major decision.

Austin Ripke and Indian Luke Tanier squared off at 135 lbs. Ripke led 7-4 to end the first. Neither scored in the second, and Tanier started down in the third period.

With Tainer starting in the down position, Ripke showed the optional start, giving Tainer one point to knot the score at 7.

Ripke squeaked out an 8-7 victory when Tanier was hit with a penalty, giving Archbold three team points.

Wauseon got on the board and closed the gap when Brandon Volkman recorded a fall over Trevor Meyer at 140 lbs.

C. Rufenacht (152 lbs.) stepped on the mat, but the Indians forfeited to the senior, bouncing the lead back to the Blue and Gold, 13-9.

Nick McCall added a major decision over Jake Fidler at 171 lbs. for a 16-13 Wauseon lead.

The Streaks got their last taste of victory at 189 lbs. when Neuenschwander pinned Trent Seiler at 1:33.

The Indians picked up wins in the remaining six weight classes for the 44-19 final.

“Wauseon has gotten better. Their little kids program has helped them out a lot, and they have a bunch of kids people haven’t heard about that are young and are wrestling well,” said Becher.

“I am still impressed with our freshmen. They go out there and wrestle hard.

“I think that is the difference between our younger kids and our older kids; the older kids are worried about winning, and our younger kids don’t expect to win, so they just go out and wrestle. Good things happen when you do that.

“That is what our upperclassmen have to do, also… just go out there and have fun and wrestle to get better and get ready for the end of the season.”