Courtney Day appears to be tagged out between third base and home, but Milan Edison’s pitcher, Susan Knight (11) dropped the ball. Day scored on a double to left field by Morgan Ducey to give AHS a 3-0 lead. The Streaks beat the Chargers in the regional semifinal 4-0.– photos by Mary Huber

The Streaks defeated Milan Edison, 4-0, Wednesday, May 26, and Elmwood, 5-2, Saturday, May 29, to claim the Division III regional title at Ashland.

With the win over Elmwood, the Streaks upped their record to 26-4 and tied the school record for most victories in a season.

The Streaks faced a tough Edison squad (24-5) in the semifinal and came out on top 4-0.

Archbold opened scoring in the third inning when Alyssa Schaub walked and scored on a Courtney Day double.

The same two players teamed up for another run in the fifth. Schaub doubled and moved to third on an error, and Day bunted to first base. The first baseman tried to tag Day, but Schaub bolted for home and beat the throw to raise the score to 2-0. 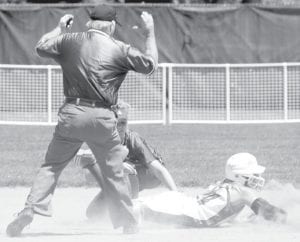 Elmwood’s Emily Reynolds is out at second base for the Royals’ third out of the third inning in the regional final. Whitney Striff hit a grounder to left field, which was scooped up by Stacy Wyse. She threw the ball to second baseman Devin Newman, who tagged out Reynolds.

Day was also safe and advanced to second on the play at home.

Morgan Ducey hit a clutch two-out double to score Day for a 3-0 lead.

Day also scored in the top of the seventh after walking and advancing to second on a sacrifice bunt and an error.

Sarah Wyse put the clamps on the Edison offense, surrendering only one hit while striking out eight and walking one.

The Streak defense was solid as it committed only one error and made plays behind Wyse the entire game.

Jenna Nofziger led the eight-hit attack with a single and a double.

“We played a very solid game against a good Edison squad and came up with a huge victory,” said Joe Frank, AHS head coach.

“We played some ‘small ball’ today, and the bunt by Courtney ended up leading to two runs. 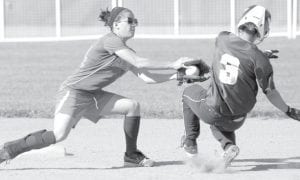 Jenna Nofziger (3) is called out after attempting to steal second base in Archbold’s regional semifinal against Edison.

“Sarah was outstanding on the mound and was ahead of hitters all day long.”

Schaub jump-started the Streaks with a home run on the second pitch of the game to lead off the bottom of the first inning, and the Streaks never trailed.

The Streaks upped the score to 2-0 thanks to a runbatted in double by Sarah Wyse in the third.

Archbold made it 4-0 on a double steal, which led to Day scoring and a Morgan Cody RBI single.

The Royals struck back with two runs in the sixth. Archbold answered with a run of its own thanks to an RBI single by Nofziger, which scored Abbey Graber after she had reached base on a single.

Graber had alertly gone from first to third on a sacrifi ce bunt by Devin Newman before Nofziger’s single.

The Royals (19-10) put two runners on base in the seventh before a ground ball to third base led to a force-out to end the contest and give the Streaks a regional championship.

Shortstop Mindy Wyse catches a pop fly for the first out of the fifth inning in Archbold’s regional final with Elmwood.

Sarah Wyse led the way at the plate, going 3-3 with two doubles and a single. Graber had two hits as Archbold had nine in the game.

“This was a great game, and we had to fight for every run we scored,” said Frank. “We battled in all phases of the game.

“I am just so happy for this group of young ladies. They have taken extra batting practice and ground balls on a consistent basis this year, and deserve all of the accolades they are receiving.

“This is truly a ‘team’ with every single player contributing throughout the lineup this year.

“I am confident we will represent our school and community in a positive way next week in the state tourney. 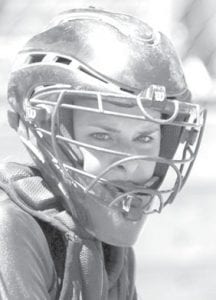 Catcher Morgan Ducey gets instructions for the next pitch. –photo by Mary Huber

“As I have stated earlier, I am blessed to work with such a dynamic group of young ladies and outstanding assistant coaches. This has been a great ride and we hope it continues two more games.”

The Falcons were ranked 10th and the Redstreaks, second, in the final Ohio High School Fastpitch Coaches Association poll. 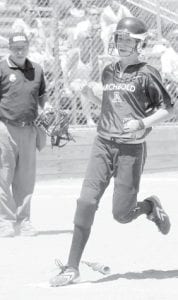