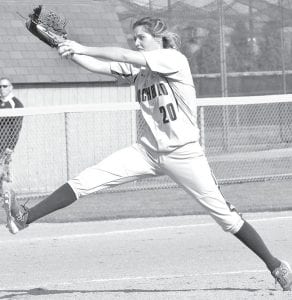 Payton Robinson delivers a pitch to a Montpelier Locomotive, Thursday, April 14. The senior and Alyssa Ziegler combined on a three-hit shutout as AHS won the NWOAL contest 6-0.– photo by Mario Gomez

The Blue Devils scored five runs in the second inning and six in the third to defeat Archbold 11-0 at Springfield.

Springfield collected 10 hits while the Streaks managed only three.

Madison Kohler doubled to lead AHS at the plate.

Payton Robinson and Ziegler combined on a three-hit shutout as Archbold opened its NWOAL slate with a 6-0 win, Thursday, April 14.

The Streaks collected three runs in the third to break a scoreless tie.

Kohler later scored on a wild pitch to make it 3-0.

Archbold added three more runs in the next frame as Nafziger plated Brooke Hines while Kohler drove in Ziegler, who earlier had doubled. Shelby Cline then doubled home Kohler to complete the scoring.

Nafziger, Ziegler, Wyse, and Kohler each had two hits.

Robinson and Ziegler each struck out three while the Locos drew only one walk.

Archbold jumped on archrival Wauseon for five runs in the second inning and went on to defeat the Indians 9-2.

Macey Rupp added an inside the-park home run in the third to make it 6-0.

The Streaks added three insurance runs in the sixth.

Wyse hit a bases-loaded double that cleared the bases to cap the scoring.

Robinson gave up only three hits and two unearned runs, struck out three and walked none in the complete game victory.

The Streaks and Wildcats were knotted at 3 before Archbold broke the game open with a five-run seventh as Archbold won the nonleague contest, Saturday, April 16,at Lima Bath.

AHS collected five hits in the inning, keyed by an RBI single from Wyse, an RBI double from Kohler, and a two-run homer from Cline.

Ziegler gave up only five hits and one earned run. Nafziger and Wyse each had two hits.

The Streaks dug themselves out of a 4-0 deficit in the first and defeated the Trojans 11-6.

Robinson pitched the first five innings while Ziegler pitched the last two. Robinson allowed only six hits while giving up five unearned runs. Ziegler retired six of the seven batters in her two innings on the hill.

“We had a successful week, in terms of wins, but had a lot of issues with our defense,” said Joe Frank, AHS head coach.

“We will get better because we are a lot better than the way we are playing right now.

“We did show some signs of life offensively, but continue to strike out too much. I am confident we will continue to improve as the season goes on and our confidence level goes up.”