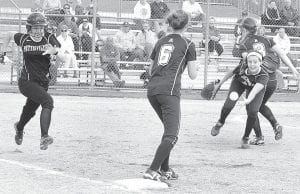 As Pettisville’s Andi Aeschliman sprints to first base, Blue Streak pitcher Payton Robinson flips the ball to Desi Newman. Aeschliman was called out on the play.– photo by Mario Gomez

Archbold (7-1 NWOAL) won a share of its eighth straight Northwest Ohio Athletic League softball title with a 10-3 victory over Bryan (10-12, 5-3 NWOAL), Monday, May 6, at Archbold.

The Streaks share the title with Evergreen. The Vikings also completed their NWOAL slate with a 7-1 record.

The three wins move the Streaks to 23-1 as they ride a 16-game win streak into tournament play.

Archbold exploded for a seven-run second inning, capped off by Becca Gerig’s grand slam home run, to pull away and clinch a title tie.

Gerig’s homer was the third of the inning as Hanna Allison and Jesse Fidler hit back-to-back home runs to start the inning.

Fidler also led off the third with her second solo blast of the game to give AHS an 8-1 margin.

Archbold pounded out 16 hits, led by Fidler’s 4-4 with two home runs and three runs batted in. Natalie Beck was 3-3, while Allison and Gerig each had two hits. 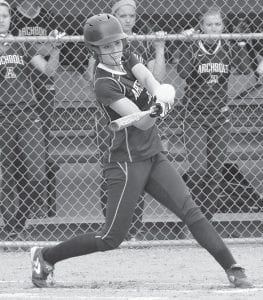 Allison picked up the win on the mound as she gave up three runs on six hits while striking out one and walking two.

“This was a big win for us,” said Joe Frank, AHS head coach. “We had our backs against the wall after losing our first league game, but we persevered and found a way to win the rest of our NWOAL games.

“Winning a title eight straight seasons speaks volumes about this team, but also the previous teams as well. We have been blessed with a lot of talented, hard-working young ladies through the years.

“I would also say that I have an outstanding coaching staff that helps prepare our team for anything we face throughout the course of the season.”

The Streaks traveled to Sylvania, Tuesday, May 7, and came home with a 9-3 victory.

Archbold jumped out to a 2-0 lead in the first inning and expanded it to 6-0 after three.

Timely hitting, along with some Cougar errors, allowed AHS to take control.

Archbold had 12 hits with Gerig leading the way, going 3-4 with a double and three RBIs. Cassidy Wyse was 2- 4 with two doubles and two RBIs, while Beck was 2-4 and scored two runs.

Allison was the winning pitcher. She scattered nine hits while striking out five and walking none.

Archbold played errorless defense behind Allison, which was another key to the win.

“We played a good game against a solid Southview team,” said Frank.

Archbold jumped out to a 7-0 lead after one inning and went on to defeat the Blackbirds 16-1, Friday, May 10, at Archbold.

The Streaks had eight hits in the first inning, led by Beck’s bases-loaded triple and Fidler’s two-run home run.

AHS scored in every inning and collected 15 hits, while Pettisville had three.

Wyse led the way, going 3-4 with an RBI, while Beck and Payton Robinson were each 2-2. Paige Peterson was 2-3 with a three-run home run.

For Pettisville, Emily Hubby had a double. Johanna Roth and Kaija Blosser each had a single.

Robinson was the winning pitcher. She gave up one run on three hits while striking out five and walking none in five innings.

Delaney Nofziger took the loss. In four innings she gave up 16 runs on 15 hits, struck out one, and walked two.

“This was a good way to cap off a great regular season,” said Frank. “We now have to prepare for tournament softball.

“It’s one-and-done from here on out, and we have to be prepared for anything that may happen.

“I feel our confidence level is as high as it has been all year long, and hopefully we can play well. We will have to be at our best each and every time out, or the season could come to an end very quickly.

“We are looking forward to the challenges tourney softball provide and the excitement that goes along with them.”

The Streaks, ranked second in Division III by the Ohio High School Fastpitch Softball Coaches Association, were scheduled to play Paulding (7-7), yesterday, Tuesday, in a sectional semifinal at Archbold.