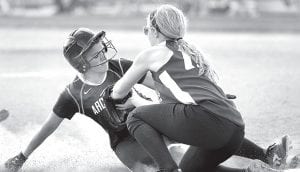 Cassidy Wyse is safe at third base in the fourth inning of Archbold’s sectional final with Tinora. The Streaks advanced to the district semfinal with a 7-0 victory.– photo by Mary Huber

The Streaks dispatched of the Panthers 11-1 and then shut out the Rams 7-0.

Fairview (17-2) was scheduled to play Lima Central Catholic (11-7), yesterday, Tuesday, in the other district semifinal.

Winners play for the district championship, Friday, May 24, 5 p.m.

The Streak offense was in high gear in the first inning as Archbold scored 10 runs on nine hits.

Cassidy Wyse, Hanna Allison, and Jesse Fidler all had two hits in the inning. Fidler’s eighth home run of the season was a three-run shot that gave AHS a 4-0 lead as they took complete control.

The Streaks ended the contest with 14 hits and were led by Wyse and Allison with three each. Fidler, Becca Gerig, and Natalie Beck each had two hits.

Payton Robinson was the winning pitcher. She threw a three-hitter while striking out three and walking none.

“This was a great way to start tourney play,” said Joe Frank, AHS head coach. “Scoring 10 runs in the first inning put the game out of reach early, and allowed us to play the rest of the game with a lot of confidence.

“Payton threw very well, and it was good to see her attack the Paulding hitters.

“If our pitchers can throw strikes, which they normally do, we have a very good defense playing behind them. I am very pleased with the win as we played well in all facets of the game.”

Archbold captured its eighth straight sectional title with a 7-0 whitewashing of Tinora (12-9), Thursday, May 16.

Archbold made it 2-0 in the second after Jen Gerken, who singled to start the inning, scored on an error.

Archbold added a pair of runs in the fourth when a Gerig double scored Desi Newman and a Wyse single scored Gerig.

The Streaks put the game away in the sixth with three more runs. A Beck bunt single was followed with Gerig being hit by a pitch.

The two runners both tagged and Wyse scored all the way from second as Zipfel’s momentum caused the upper half of her body to fall over the fence.

The ball was still considered to be live, since her feet were still on the fair territory side of the fence.

Allison was the winning pitcher as she completely stymied the Ram attack. She gave up only four hits while striking out five and walking none in her six innings.

Robinson pitched the seventh inning and retired the Rams in order while striking out one.

The Streaks collected 13 hits and were led by Wyse, who went 4-4. Beck collected three; Fidler and Jen Gerken each had two.

“We played a very solid game today against a team that has been playing very well late in the season,” said Frank. “Hanna pitched very well after taking some time off because of an injury.

“It was good to see her move the ball around and hit her spots. She had the Tinora hitters off-balance the entire game, and that was huge.

“We swung the bats pretty well, although we did leave a lot of runners stranded in the game.

“It is good to be headed back to Bath. We have always played with a lot of confidence on that field, and hopefully we can play well next week at the district tourney.”