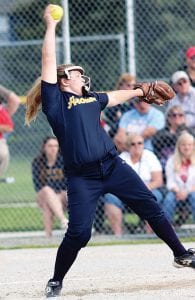 Archbold had only three base hits in the contest– from Gabby Nafziger, Kylie Sauder, and Bralynn Blanton.

“Hitchcock is a top-notch pitcher, and is going to continue her career at Rutgers University. We don’t see pitching like that on a daily basis.

“I thought our kids fought hard until the end, but it just wasn’t meant to be. However, we had an outstanding season and I could not be more proud of these girls for the way they came together as a team and battled day in and day out for each other.

“Finishing with a record of 18-9 is nothing to hang our heads about, especially when some of our losses were to teams like Springfield, Anthony Wayne, Wauseon, Otsego, and Eastwood. 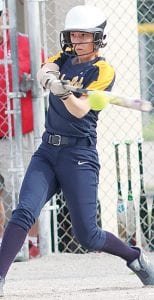 Senior Gabby Nafziger was one of three Blue Streaks who got a hit against Eastwood pitcher Ashley Hitchcock in the district final.– photo by Mary Huber

“Our four seniors are going to be greatly missed. Faith Wyse, Andee Grime, Gabby Nafziger, and Alexa Wilson gave this team and program everything they had and provided great leadership for us.

“The underclassmen are going to have to work hard to fill their shoes.”

The Streaks advanced to the final with a 6-4 win over Otsego (18-6) in the district semifinals, Monday, May 13, at Maumee.

The Streaks scored four runs in the second inning and led 6-2 going into the seventh inning.

The Black Knights scored twice in the top of the seventh, but the difference was too large to overcome.

Blanton was the winning pitcher. In seven innings she allowed four runs on 11 hits, struck out six, and walked none.