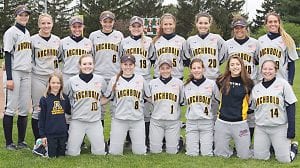 Archbold scored four runs in the fifth inning, which turned out to be enough as the Streaks defeated Bryan 4-3 to win its 11th straight NWOAL softball title, Monday, May 9, at Bryan.

Both the Streaks and the Golden Bears entered the contest with 7-0 NWOAL records.

The Bears scored twice in the bottom of the fifth and once in the sixth, but could not score the tying run.-Posted 5.9, 8 pm