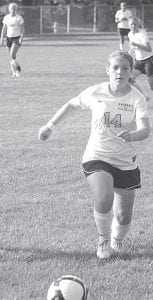 With her teammates waiting in the background for a pass, Lauren Kindinger (14) races to gain control of the ball.– photo by Scott Schultz

In the first two minutes Alicia Drewes took the ball one on one straight to the goal, scoring in the far left corner.

Within another two minutes Drewes won another ball, which she floated past the goalie for a 2-0 lead.

After the first half the sails seemed to be taken off the Pirates’ ship, but Continental showed it was ready to fight in the second half.

After winning a corner kick, the Pirates scored. They continued to attack but the AHS defense, led by Hannah Leininger, Paige Stamm, Carley Wyse, Rupp, and Lantz, denied any more attempts on goal.

The first half showed both teams’ defensive skills. Drewes, Lantz, and Kindinger all had shots on goal but were denied.

Beck also had her work cut out for her as she also denied all shots in the first half. The game was scoreless at halftime.

Kalida was off to a quick start to the second half with a goal to lead 1-0.

Drewes dribbled through many defenders to tie the score at 1.

With Leininger going out with an injury, Brie Deskins came in to fill some big shoes on defense. The AHS defense held Kalida scoreless the rest of the game.

With three minutes left, Drewes won the ball in the air and scored for the 2-1 final.