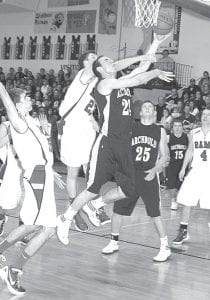 Archbold’s Luke Kammeyer (24) gets fouled by Tinora’s Sam Lehman (23) under the basket. The Blue Streak senior led all scorers with 18 points.– photo by Scott Schultz

Thirty-two minutes wasn’t enough for Archbold and Tinora, Saturday, Feb. 4, when the Streaks nipped the Rams 39-37 in overtime in non-league boys basketball action at Tinora.

Tinora opened the scoring on a Sam Lehman putback.

The Streaks struggled early, committing three turnovers on their first five trips down the floor.

Luke Kammeyer finally broke the ice for the Blue and Gold on a jumper, knotting the score at 2.

A low-scoring first eight minutes ended on another Lehman jumper for a 9-8 Ram lead.

The squads went back and forth in the second period, with Kammeyer hitting two from the charity stripe for a 15-13 AHS lead.

Kammeyer paced Archbold with 18 points, including 6-6 from the foul line. The Streaks sizzled from the line, finishing 11-12, while the Rams were 0-1.

“We like to go inside because we think we have a couple of guys who can score inside,” said Doug Krauss, AHS head coach. “Most teams don’t necessarily have two guys that can guard inside, so we like our odds.

“Luke converted at the foul line. He was a good presence in there for us, and that’s awesome to see.

“This was a great win– a great game for us and great foul shooting for us. This is a great time of the year to shoot foul shots.”

Archbold led 20-18 at the break on a three-pointer by Zeb Frank.

Archbold started the second half scoring with a pair from Kammeyer at the foul line. The senior followed with a putback and the Streaks held their largest lead, at 24- 18.

Archbold’s Tyson Dietrich scored on a baseline drive and Kammeyer tipped in an inbounds lob from Frank to close the third-quarter scoring up 28-25.

Tinora tallied six points in the fourth while the Streaks scored on a foul shot from Jay Miller and a jumper from Kammeyer for a tie at 31 at the end of regulation.

The Streaks had a chance at the end to take the win.

With 2.3 seconds left Archbold had the ball at midcourt. Frank inbounded to Kammeyer, who tossed the ball right back to his teammate. Frank launched a long three, but the ball bounced off the back of the rim to send the contest into overtime.

“We would have liked to have that shot in a couple more feet, but we’ll take Zeb taking that shot,” said Krauss.

Archbold scored on a deuce by Kammeyer to start the overtime, while the Rams came up empty on their first trip.

Jake Mahnke, Tinora’s three-point shooter who was held to seven points, drove the lane, but Kammeyer blocked the shot. The Streaks grabbed the loose ball with less than two minutes to play.

“Tinora likes to throw the three up, and they have good shooters,” said Krauss.

“Jake Mahnke is one of the best around, and for the most part we guarded him well.”

“We knew defensively, Doug Krauss is a very smart guy and has smart players,” said Rob Mahnke, Tinora head coach. “We knew they would try to deny Jake (Mahnke) the ball, and they did.

Frank hit a jumper on Archbold’s next possession, upping the difference to 35- 31.

Tinora came up empty on its next possession, but Robert Wou converted an AHS turnover into two points to close the gap to two.

Dietrich hit both ends of a one-and-one, pushing the lead back to 37-33 with 24 ticks left on the clock.

Lehman, who led Tinora with 10 points, hit a jumper and immediately called a time-out with the Streaks up 37-35.

Out of the time-out the Streaks had to go the length of the court. The Rams were forced to foul to stop the clock, sending Frank to the charity stripe.

Shooting a one-and-one, Frank hit both, making it a two-possession game with seven seconds left in OT.

Tinora’s Casey Liska closed out the scoring on a short jumper for the 39-37 final.

Archbold out-rebounded the Rams 23-14, but committed

18 turnovers to nine for Tinora.

“I am proud of our guys,” said Mahnke, “but give Archbold credit. They made foul shots and made the plays down the stretch.”