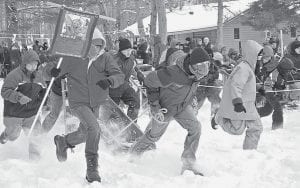 Top: Archbold Boy Scout Troop 63’s Dragon Tyrant Patrol leaves the start line during the Black Swamp council’s annual Klondike Derby, Saturday, Jan. 31. The Tyrants finished in the top 20. Right: The Infinity Patrol, eventual winners of the 2009 derby, at work on one of the skills tests, using a two-man crosscut saw. Patrols pulling dogsleds race between a central location and individual skills tests. Scores on the tests were counted to determine the winners. – courtesy photos

It’s part dog sled race (without the dogs), part skills test, and this year, partly a test of cold-weather survival.

It’s the Boy Scouts’ annual Klondike Derby, and this year, a team of Archbold boys won in bitter cold temperatures and deep snow.

Patterned after dog sled races in Alaska, patrols from different troops go to the starting line with a sled pulled by team members. From the starting line, they race to a central point known as “Customs.”

From Customs, the patrols race to several “Cities.” At each city, their scouting skills are tested, then they race back to Customs for another assignment.

Eric Moon, Archbold scoutmaster, said, “It was four (degrees) below (zero) when we got there, and it stayed that cold. There was well over a foot of snow.” 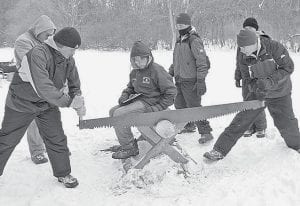 To prepare for the event, Moon said the scouts discussed proper clothing, dressing in layers, and the importance of waterproof boots. He said one boy’s feet got cold; he was taken inside to warm up.

In the past, Moon said Archbold patrols were “coming in pretty close” to winning.

“We’ve been in the top 10 in the last three to four years. Last year, one sled placed eighth.

“We thought this might be the year,” he said.

Steider said this was his second Klondike. His first was cold, but there wasn’t much snow.

“It was a pain to pull the sled around. It didn’t make it fun,”

This year, they started later and there were a few paths through the deep snow, making the going easier. 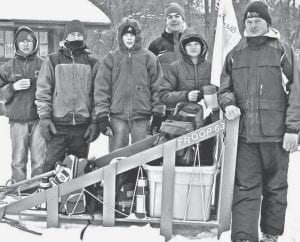 “It was a better experience.”

The skills tests at the cities ranged from first aid to using a two-man crosscut saw.

“The very last event, we had to tie five different knots. They docked us 30 points because we switched two of the knots,” Steider said.

In other words, they didn’t tie the knots incorrectly- they just got them out of order.

Their best event called for them to lash three six-foot poles, or “staves,” together, and tie a fishing weight to a line at the end. Then, they had to try to “cast” the fishing weight onto oversized mousetraps, and have the trap hold the weight.

The scouts are timed racing back and forth between cities and customs- but the times are only used in the event of a tie.

Steider said the Klondike not only tests the boys’ knowledge of their scouting skills, “it tests you on the inside, to see if you have the dedication” to finish.

The patrols spend about six hours out in the cold, he said.

“When you’re running around, they kind of push you on, make you feel you have reason to be out there,” he said.

“If you’re down, they bring up. If you’re mad because you’ve made a mistake, they’ll crack a joke and bring your spirits up,” he said.