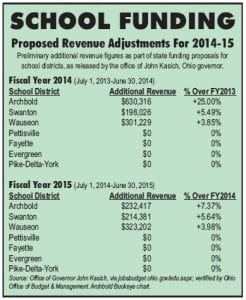 The State of Ohio funding formula proposed for the next two fiscal years shows the Archbold Area School District receiving an additional $862,000.

But Pettisville schools won’t get any additional money.

Swanton schools are in line for about 11% in additional money, while Wauseon schools will get about 7.8% more.

Like Pettisville, the Fayette, Evergreen, and Pike- Delta-York districts would get no additional revenue.

However, the office has not released any of the language used to build the funding formula, so no one knows exactly what guidelines or principles were used to develop the numbers.

Smith said the bill is a long way from being completed.

Smith said it appears the education funding proposal looks much closer at school district valuations, something that has not been looked at for four years.

Jim Lynch, special advisor on state budget communications at the Ohio Office of Budget & Management, said districts that receive no increase actually benefit from the continuation of “guarantee funds” in the state budget.

Under the guarantee, no district will receive less in state formula funding than it did in the current fiscal year.

The guarantee shields districts from losing state money due to lower student population.

Preliminary figures for enrollment at Pettisville showed that for the 2012-13 school year, the district was down 21 students, to 517.

There is no indication how the governor’s office arrived at the number.

Lynch said Pettisville and other “zero growth” districts will still have an opportunity to attract additional funds through the Straight A Fund.

The Straight A Fund awards those districts who apply for ambitious new strategies for helping their students improve their achievement levels and increase their operational efficiency.

Referring to Archbold, Lynch said “Achievement Everywhere,” the name for the governor’s education budget proposal, “limits growth to an increase of 25% in the prior year, or to 10% of total resources.”

Lynch said a limited number of school districts could see funding increases of more than 25%.

For 2012-13, the governor’s office indicated Archbold schools were scheduled to receive $2,521,265 in state formula funding, not including transportation funding and career technical education attributed funds.

For the 2013-14 fiscal year, the governor’s funding proposal shows Archbold with an estimated 1,293 students.

For FY 2014-15, the school funding proposal shows the district’s three-year per-pupil tax valuation falling to $149,388, while estimated enrollment is unchanged.

The spreadsheet released by the governor’s office shows Pettisville received $1,739,653 in state formula funding for 2012-13.

With a three-year average valuation per pupil of $115,756, almost 24% less than the Archbold school district figure, state funding for 2013-14 is flat-lined, with no increase.

In FY 2014-15, Pettisville valuation goes up to $117,509, but for the second straight year, the proposal provides no additional funding.

Smith said when the proposed education funding plan was released, it was thought that low-wealth dis- tricts– districts that have difficulty raising money due to low property values– would receive additional state money.

But analysis of the proposal shows most of those low wealth districts were “flat-funded,” meaning no additional money– just like for Pettisville.

Smith said this is just the beginning stage of the school funding discussion.

The governor’s proposal must work its way through the Ohio House of Representatives finance committee before being debated and adopted by the full House.

The proposal next will go to the state Senate, where it will go through the same process.

Smith said there will probably be differences in the House and Senate versions, so the bills will go to a joint conference committee before being finally approved.

The state two-year budget, including the school-funding portion, must be approved by July 1, 2013.

It could take right to that date, and possibly beyond, before there is a final version of the plan.

“There’s a long way to go, and there are sure to be changes,” Smith said.

On Monday, school superintendents, including Steve Switzer of Pettisville and Aaron Rex of Archbold, attended a meeting with Randy Gardner, state senator for Ohio Senate District 2 (R-Bowling Green), to discuss the formula.

Rex said after looking over the governor’s proposal, he was “cautiously optimistic” about the outcome for the Archbold School District.

“We are not getting overly excited, but it’s better than what we expected,” he said.