Archbold Schools Will Benefit From Rover Pipeline, But… 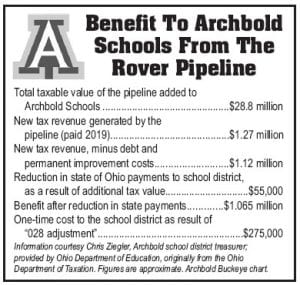 The Archbold School District will benefit from the Rover pipeline.

But thanks to the way Ohio funds schools, the benefits will be reduced.

In fact, some of the benefit will be taken away by a state law designed to improve the funding situation for other school districts.

The 42-inch high-pressure natural gas pipeline was constructed in the summer of 2017. It runs through the district east of Archbold.

Overall, the 700-plus mile pipeline connects natural gas deposits in eastern Ohio and western Pennsylvania to a major pipeline junction at Defiance.

The pipeline then goes north through Fulton County and the state of Michigan before ending at a natural gas pipeline hub outside Sarnia, Ontario, Canada.

She estimated the district will receive an additional $1.27 million in tax revenue from tangible public utility taxes in tax year 2018 (payable 2019).

After debt and permanent improvements are taken out, Ziegler estimated the district will have an additional $1.12 million in additional tax revenue.

But the additional tax value will change how much money the district will receive from the state.

Because the pipeline added about $28.8 million to the total property value of the district, Ziegler said the district “looks wealthier” to state officials.

As a result, the Ohio Department of Education recomputed the amount of money the state will provide to Archbold Schools for FY 2019.

The recalculation reduced state funding to about $3.97 million, a reduction of roughly $55,000.

Ziegler said the state implemented a new law originally designed to assist school districts that were impacted by a loss of tax valuation and revenue that resulted from the closure of nuclear power plants in the southern part of Ohio.

The law created a onetime adjustment for districts when valuations change by 10%.

This became known as the “028 adjustment.”

“This one-time adjustment came in to help them (school districts), to give them more state money as a result of their decrease in valuations,” Ziegler said.

“Even prior to this being approved, it was said at that time it could be the reverse, too… but no one knew of anything at that time.”

So with state funding originally estimated at about $3.9 million for fiscal year 2019, she estimated the 028 adjustment will cost the district about $274,495.

Then, moving forward, Ziegler said she must anticipate what the state funding will be.

Based on past history, she said she believes state support for the district will hit the “guarantee,” or floor– the minimum amount of state funding the district can receive.

She said she hopes the minimum amount will be $3.9 million. But, district officials won’t know for sure until the state biannual budget is approved.

Ziegler said an ODE official urged district officials to talk with state representatives “and share our story with them, because maybe there is something that could be done in law to help us with the impact that’s going to happen as a result of the 028 adjustment.”

Ziegler said as a result, she will update the district fiveyear financial forecast, then bring it to school board for approval in February 2019.

“I also think it is imperative that Mr. (Jayson) Selgo (incoming superintendent) and I meet with Mr. (Randy) Gardner (state senator (RBowling Green) representing a portion of Fulton County, including Archbold) and any (Archbold school) board members if they feel they want to reach out,” she said.

“I feel we need to reach out and share our story. It’s not going to hurt us.”

Marc Robinson, interim superintendent, said, “As often happens with legislation, this is what clearly is called an unintended consequence.

“They intended this legislation to deal with those people that lost valuation, but here we are because we have such an appreciable amount of valuation. This is also affecting us, but not in the way the legislation was intended.

“That’s why it’s critical to meet with Randy Gardner to (make) him aware.

Ziegler called for a special work session meeting in January to discuss what to do with extra revenue the district receives.

“It doesn’t have to go into the general fund. This can be set aside into a bond fund for a building, then have tax relief down the road for a building. There’s just all kinds of things,” she said.

In response to a question from John Downey, board member, Ziegler said the increase in valuation will result in some decrease in school property tax for property owners.

The next meeting is Monday, Jan. 14, 7 pm, in the high school media center.