Archbold Schools Have One Snow Day Left; Pettisville Has Four 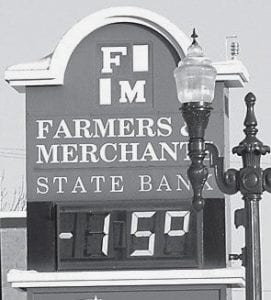 Temperatures plummeted to as low as 18 degrees below zero last Thursday and Friday, but had warmed up to -15 by 10 a.m. on Friday.- photo by Mary Huber

The Archbold Area School District has used four of five snow days built into the calendar.

“Obviously, it’s very early in the school year,” to have used four of the five available snow days, also known as “calamity days.”

“However, in reflection, I don’t know if there were any decisions that I would have made differently.

“Safety is the paramount concern,” he said.

Deskins said that the safety concern extends beyond just whether or not school buses can negotiate snow-covered roads.

He said he must also be concerned about children who walk to school in possibly dangerous temperatures, children standing outside at bus stops, and high school students who drive to school.

He said he also must consider staff members who drive to work from all over the area.

“I try to merge all those factors.”

The last calamity day, Jan. 16, was called due to record cold temperatures, he said.

If the district uses all its available calamity days, provisions have been made to tack days onto the end of the school calendar.

Chris Lee, treasurer of the Pettisville Local School District, said so far, the district has used only one calamity day.

The reason for the difference between the districts is the school district calendars. Archbold schedules a spring break each year; Pettisville takes a longer Christmas vacation.

Pettisville students were already on vacation during some of the worst December weather.

Lee said their one calamity day was taken on Friday, Dec. 19.

Pettisville students were also out of school on Jan. 16, because of a previously scheduled teacher in-service day.- David Pugh