The Archbold Area School District ended the 2012-13 fiscal year about $843,000 in the red, Christine Ziegler, district treasurer and chief fiscal officer told the Archbold School Board at its Wednesday, July 17 meeting.

Expenses also were less than expected. Ziegler said she had originally projected expenses of about $12.1 million.

When the final paperwork was done, actual general fund expenditures were $11,980,340.

She said the expenditures were up about 1.4% over the prior year.

The district had money in reserve and used the account to cover the shortfall.

Ziegler said the district ended the 2012-13 fiscal year with about $3.8 million in cash on hand.

In response to questions from board members, Ziegler said the district did see significantly lower heating bills as the result of a mild winter. 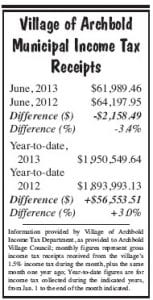 For the current fiscal year, 2013-14, Ziegler told board members figures will change, as staff changes and the wind turbine impact district finances.

Also, she said cuts in federal funding for special education will impact the general fund.