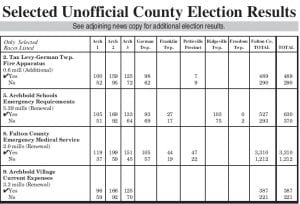 Voters in the Archbold Area School District approved a $1.1-million, fiveyear emergency property tax levy renewal, 630 to 370, in the Tuesday, May 3 Special Election.

Seven of the eight precincts that vote on Archbold school issues passed the measure.

Freedom Township, in Henry County, voted the levy down 2-0.

The totals are unofficial. They include absentee ballots, but do not include provisional ballots.

Provisional ballots will be counted when the boards of elections of the two counties conduct an official count within the next two weeks.

David Deskins, superintendent of the Archbold Area School District, said Tuesday night, “It appears our community has come through again and shown their support for their schools.

“With the state planning reductions (in money distributed to the district) that could total $1 million over two years, this vote was critical.

“We are very, very fortunate. That community support, plus many other factors, allows Archbold schools to continue to be an outstanding district.”

In percentage terms, the unofficial total vote was 63% in favor of the levy, to 37% opposed.

Tuesday’s vote was the second time Archbold voters approved the $1.1-million property tax levy. It was first passed in 2006.

The Archbold Fire Depart- ment can place its order for a new fire truck, as voters in German Township passed a six-tenths (.6) of a mill, fiveyear levy, 489 to 290.

Every precinct, except those German Township voters who cast ballots at the Pettisville precinct, passed the measure.

In the Pettisville precinct, seven votes were cast for the levy; nine no votes were tallied.

Voters in the Village of Archbold approved the renewal of a 3.3-mill, five-year property tax levy that provides operating funds for the village.

Since the levy has been on the books since 1976, it has been reduced. Today’s effective millage for agricultural and residential property is less than one mill.

Simplicity, honesty and sincerity are qualities that give character to people and to things produced by people.– William Feather