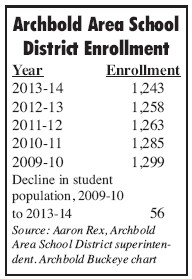 Based on preliminary, unofficial figures, enrollment in the Archbold Area School District is down, continuing a five-year trend.

The district takes its official school enrollment count in October. The official count, known as the ADM, or Average Daily Membership, is used by the State of Ohio Department of Education for school funding and other purposes.

Rex said the decline is due to a smaller kindergarten class, which is down 14 from last year’s class.

This year’s kindergarten class has 82 students. The graduating Class of 2013 had 107 members, a difference of 25.

The number of students choosing to attend Archbold through the Ohio open enrollment program is up from 58 to 73, an increase in 15 students.

Also, the number of students choosing to leave the district through open enrollment is down, from 91 last school year to 87 for 2013-14, a difference of four.

Rex said there are 51 new students in Archbold schools this year. They live within the school district.

Over the last five school years, enrollment has declined anywhere from five to 22 students each year, from four-tenths (.4%) of a percentage point to 1.7%.

Rex said he is not alarmed by the one-year decrease.

The number could still change as students move in or out of the district.

“You like to see your enrollment as stable or going up,” he said.

District officials expected to see about 100 students come for kindergarten this year. He noted other superintendents were reporting smallerthan expected kindergartens.

While the incoming student enrollment was down, Rex said he was pleased to see the number of open-enrollment students was up, while the number leaving the district was down.

He noted that money from the state follows the students to a new district. When more students open enroll at Archbold, Archbold receives more revenue.–David Pugh