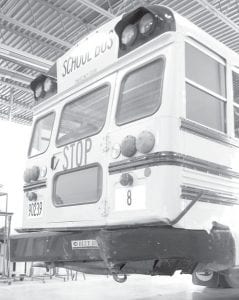 The Archbold school bus involved in a crash Monday morning, Sept. 14. Damage appears mostly confined to the rear bumper, which is pushed in on the right, or passenger, side. The bus was photographed at D&W Collision, where the vehicle was towed after the crash.– photo by David Pugh

An Archbold school bus stopped on US20A, twotenths of a mile east of Co. Rd. 21 to pick up students, was struck from behind Monday morning, Sept. 14.

Fulton County sheriff dispatchers were notified of the crash at 7:36 am, and dispatched Archbold Rescue to the crash scene.

Aaron Rex, superintendent, said paramedics from ALS-1 checked each student at the scene. Two were sent to the Fulton County Health Center via ambulance for further examination.

“All ended up being fine,” Rex said.

The preliminary Fulton County sheriff crash report states a 2014 model school bus, capable of hauling 86 passengers and driven by Pamela Sauder, 49, rural Archbold, was traveling east on the highway when an SUV driven by Margaret Bornholdt, 47, Archbold, also driving east, struck the bus in the rear.

Archbold Rescue transported Bornholdt to FCHC, where she was treated and released.

She was cited for failure to maintain an assured clear distance ahead.

Rex said he called the parents of the 20 students who were on the bus at the time. Many drove to the scene.

Parents took some of the students to school. One student opted to stay home for the rest of the day.

Rex said a second bus was dispatched to the crash scene. Some students remained at the scene for 45 minutes before being taken to school.

He said bus drivers do a pre-trip inspection each morning before starting on bus routes. If any of the vehicle warning lights are not working, they are repaired before the bus goes on the road.