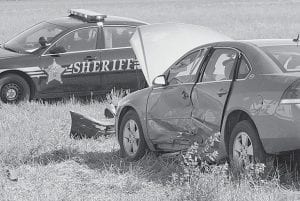 A car driven by Tacia R. Muehfeld, 18, Edon, ran into a field on the southeast corner of the intersection of St. Rt. 34 and Henry County Rd. 24 after it collided with a minivan Monday, Aug. 25. Three persons, including Muehfeld, were taken to area hospitals; all were treated and released.- photo by David Pugh

Ridgeville Township Rescue workers called Archbold Rescue to assist at the scene of a car crash about 10:47 am, Monday, Aug. 25.

The Henry County Sheriff Department report said it occurred at the intersection of Henry Co. Rd. 24 and St. Rt. 34, when a minivan, driven by Jason R. Fortman, 26, Defi- ance, was traveling south on Co. Rd. 24, and drove into the intersection of St. Rt. 34, where the minivan collided with a car, driven by Tacia R. Muehfeld, 18, Edon. The Muehfeld auto was traveling east.

Muehfeld and her passenger, Mary L. Miller, 70, rural Edon, were taken by Ridgeville Rescue to Community Hospitals and Wellness Centers – Bryan, where they were both treated and released.

Archbold Rescue transported Jessica Fortman, 27, Jason’s wife, a passenger in the minivan, to the Fulton County Health Center, where she was treated and released.

Two children in the minivan, Brianna Fortman, 6, and Jackson Fortman, 2, were uninjured.

Deputies cited Jason Fortman for failure to yield the right-of-way.