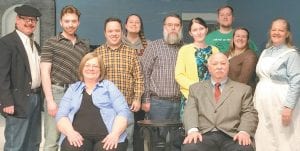 Actors and actresses from Archbold and Pettisville have roles in the upcoming Archbold Community Theatre production of the romantic comedy, “Sabrina Fair.”

An ACT press release said Jeff Patterson, Archbold, plays Thomas Fairchild, the chauffeur to the wealthy Linus and Maude Larrabee family, who live on the North Shore of Long Island.

His daughter, Sabrina, played by Samantha Morr, Wauseon, returns from Paris, presenting herself as a young woman of beauty, charm, incredible sophistication and a zest for living, very different from the Sabrina the Larrabees knew and largely ignored.

While back in Long Island, she meets family friend Julia, played by Chelsea Reecer, Pettisville.

Who will she choose as the man of her dreams?

Will it be David Larrabee, the family playboy, played by Elijah Thomas, Wauseon? She’s had a crush on David her entire life.

Or Paul D’Argenson, her wealthy French suitor who followed her across the ocean, played by Jeff Roth, Wauseon?

Or perhaps Linus Larrabee, Jr., played by Gabe Smith, Archbold. Linus’ intelligence, lack of sentimentality, and knowledge of the world stimulate her.

Others in the cast include Donna Kinsman, Archbold, the Larrabees’ maid; Jamie Lawrence, Wauseon, David’s ex-wife, Gretchen; Ken and Karen Bower, Toledo, who play Linus and Maude Larrabee; Stephanie Miller, Defiance, and Kyle Schwiebert, Defiance, who play the couple who attends the party hosted by the Larrabees.