Youngsters at Archbold Elementary School line up for their chance to go down the spiral slide during their afternoon recess on Monday, Aug. 25. The Archbold Area School District earned the highest ranking, “Excellent with Distinction,” on the Ohio Department of Education school report card. Only 74 districts across Ohio received the top ranking for the 2007-08 academic year. Four other Fulton County districts were ranked excellent for 2007-08. – photo by David Pugh

The Archbold Area School District earned the ranking of Excellent with Distinction on the Ohio Department of Education school district report cards for 2007-08.

This is the first year ODE has recognized school districts with the new Excellent with Distinction ranking, the highest available. Only 74 school districts out of Ohio’s 600-plus earned the ranking.

This is the eighth consecutive year the Archbold district has been excellent on the school report cards.

Pettisville also ranked excellent for 2007-08, the fifth year straight, and seventh out of the last eight years.

Four of the seven Fulton County School Districts were excellent. Archbold was the only county district to earn the highest ranking.

Evergreen dropped from excellent in 2006-07 to effective for 2007-08. Gorham-Fayette and Pike-Delta-York moved from effective to excellent. 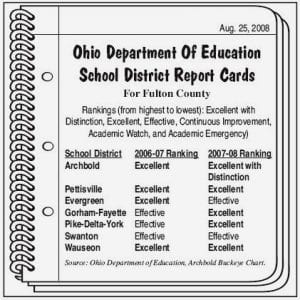 The report card ranking system is a complicated formula, based on several factors:

•State Criteria: scores on achievement tests in certain grades, plus graduation rate and other factors.

•Performance Index: measure of every student tested, based on points awarded for the number of students who scored at a particular level.

•Value Added: measure of the progress students make over the year.

•Average Yearly Progress: or AYP, which measures if students reach certain performance goals. AYP is part of the federal No Child Left Behind legislation.

Pettisville and Archbold missed only one of the state criteria.

For Pettisville, the only state criteria Pettisville missed was eighth grade social studies. Eighth graders scored 56.4%, well off the 75% requirement.

“In that initial release, we were not even excellent. But they added our special education students and alternative assessments (students who take the test orally or in another form), and the final results were positive.”

He said preliminary data showed Archbold failing to meet two of the state criteria. But ODE officials looked closer at the score and gave Archbold credit for one of the criteria.

For example, the district added a special education teacher at the middle school, partly because of the number of special education students and partly to help and support the sixth grade teachers- who have last year’s fifth graders.

Adding the special ed teacher “is a direct response” to the report card scores.

“We’ve been looking at the data for six months,” he said.

“Principals, teachers, parents, and students, they take it seriously,” he said.

Deskins said, “The thing that I think makes Excellent with Distinction all the more meaningful for us is the expectations placed on the teaching staff due to budget reductions and larger class sizes.

“The teachers really stepped up for the kids,” Deskins said.