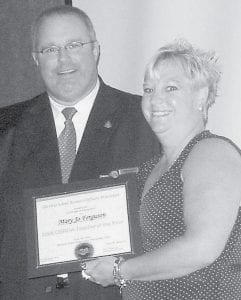 Mary Jo (Grime) Ferguson, Lorain and formerly of Archbold, with an Ohio School Resource Officers Association official, and the certificate the group presented to her for receiving its teacher of the year award in the State of Ohio. Ferguson said she was not aware she had been nominated for the award.- courtesy photo

Ferguson, a 1985 Archbold High School graduate, is the daughter of Herbert and Helen Grime, Archbold.

“I was very shocked,” Ferguson said.

“I didn’t even know I was nominated. I didn’t know I’d won anything until I got the letter.”

Ferguson is the English department chairman at Lorain’s Southview High School. She was nominated for the title by Juan Rodriguez, Southview’s school resource officer.

The citation she received recognizes her “exemplary commitment to school community partnerships through her service learning initiatives.”

Over the past three years, her classes have raised more than $18,000 for the American Diabetes Association, Make- A-Wish, and the Leukemia Society, through walk-a-thons designed to be culminating activities for research done in her freshman English classes.

Ferguson was also recognized for her “compassion and caring in partnering with teachers of handicapped students at Southview,” to sponsor the “Twelve Days of Christmas” for autistic students, and “The Muffin Man,”a grant-funded project in which autistic students and freshman English students packaged, sold, and delivered muffins as part of a fund-raiser.”

The award praised her for her “dedication to the education of the whole child, and fostering a true sense of community and caring at Southview.”

Ferguson recently completed her 17th year in the Lorain City Schools; she has been a teacher in the Lorain district since graduating from the Ohio State University in 1990.

Ferguson said she didn’t know what she wanted to do as a career until her junior year of high school.

“Prior to that, I wanted to be a nurse, or something like that,” she said.

But after taking creative writing with Mrs. Wanner at AHS, she began to focus on becoming a teacher.

“After having her, I thought, ‘there should be more teachers like her,’ and I thought, ‘I could do this.'”

“He’s a very creative teacher. I took a couple of things from him,” she said.

Ferguson will receive her Master of Arts degree in curriculum and instruction from Bowling Green State University in August. She and her husband, Jay, have two children, Storme, 13, and Skyler, 7.- David Pugh